An Irishman’s Diary about the art of political oratory 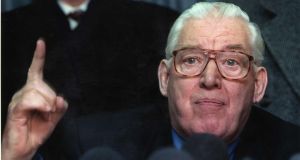 ‘If the video archivists are to believed, Rev Ian Paisley’s greatest single utterance was bellowing “Never! Never! Never!” once, somewhere. Which is indeed still impressive to witness, but hardly a candidate for the Oxford Dictionary of Quotations.’ Photograph: The Irish Times

It used to be a truism of Irish political life that, whether you loved or loathed him, the Rev Ian Paisley was a great orator. And no doubt he was, in a narrow sense. Certainly, his ability to hold a room or church served him well for most of his dual careers.

But one of the things that struck me about his interview with Eamonn Mallie is how little of anything he ever said is now quotable. In fact, confronted by Mallie with some of his past rhetorical flourishes, Paisley himself either couldn’t remember them, or didn’t want to (it was hard to know where fading recall ended and latter-day reinvention began).

When I try to remember a famous Paisley phrase now, it’s mostly slogans – “No surrender!” or “Save Ulster from sodomy” – that come to mind. Apart from those, only the vehemence with which he said no to things, rather than any phrase, stands out.

Indeed, if the video archivists are to believed, his greatest single utterance was bellowing “Never! Never! Never!” once, somewhere. Which is indeed still impressive to witness, but hardly a candidate for the Oxford Dictionary of Quotations.

Perhaps he can console himself that being quotable to posterity is not always a good thing. Eamon de Valera, for example, is today best remembered for his “laughter of happy maidens” speech – recalled, more often than not, in mockery. But at least Dev was trying to say what he was for, something Paisley in his prime rarely did.

Another truism – that great political oratory is a lost art – may be holding up better than the former DUP leader’s reputation as a speaker. And yet, apart from being an entertaining thing in itself, I suspect an ability to make brilliant speeches has always been overrated as a means of getting things done.

It’s no coincidence that some of the most quoted modern orators, such as JFK and Martin Luther King, had their messages of idealism immortalised by premature death.

By contrast, Barack Obama’s early flourishes (which were probably overhyped even then, because his speaking style has palled a bit since) were no match for White House realities. Similarly, closer to home, one of our best political debaters used to be Brian Cowen. And in office, that didn’t work out very well either.

On the other hand, I’ve never heard John Hume described as an orator. In fact, his “single transferrable speech” of the 1990s occasionally sapped the will to live of journalists and others who were overexposed to it. And yet, it may also be the most influential Irish speech in living memory.

Hume started out as a teacher, which must be where he learned the importance of saying the same thing over and over until it was embedded in the thickest skull. Thus did he hammer such concepts as an “agreed Ireland” into his students’ brains (including Paisley’s, in the end), although there are still a few slow learners at the back of the class, even now.

Hume’s speech was the triumph of substance over style. But sometimes, of course, neither of those qualities is necessary for a speaker to achieve political ends. Sometimes, as in filibustering, mere long-windedness is weapon enough.

The strategy is still alive in Washington, where last September a Texas senator spoke for 21 hours unbroken, to thwart a budget vote. And historically, it’s no surprise that, in a tactic requiring the ability to talk all day and night, this country too has produced leading practitioners.

One of the best was, like Paisley, a Northern Presbyterian. But that’s where similarities ended. Unlike Paisley, Joe Biggar was physically small, and a hunchback. He was also a nationalist, who converted to Catholicism.

Above all, by common consent, he was a terrible speaker. Happily this only added to his qualifications as a House of Commons obstructionist, when Parnell’s party sought to advance the cause of Ireland by preventing MPs conducting any other business.

The key things for an obstructionist were stamina, shamelessness, and a good bladder. Biggar had all three. As journalist TP O’Connor said in grudging admiration, he could talk interminably about anything, and “whether people . . . stopped to hang on his words or fled before his grating voice and Ulster accent – it was all one to him”.

Even laryngitis couldn’t deter him. Once, when a despairing Commons committee chairman complained that Biggar’s contributions were becoming inaudible – hoping only to shut him up – the Belfast man apologised profusely.

Then, instead of falling silent, he offered to compensate for his fading voice by moving nearer the chair. So, first gathering up the reference books from which he was quoting liberally, he did move. And resuming his speech from the new perch, he offered generously to repeat any or all of his earlier points, lest the chairman had missed them.

Why are all these useless films now being declared classics?
3 The guarded words of Trevor Rees-Jones
4