An Irishman’s Diary: Why Northern Ireland needs a H-shaped museum 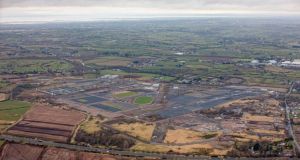 ‘As I envisage it, the building would be as tribute to the letter H itself, which has played a central role in the Northern conflict.’ Aerial view of the Maze Long Kesh site where the new peace centre will be. Photograph: PA/Colin Bailie

Somewhere in the new “peace and prosperity” campus planned for the former Maze prison, I suggest, there should be a H-shaped building.

It would of course be a nod to the site’s past, but that would not be the main point. Indeed, if Daniel Libeskind – with his notorious dislike for the perpendicular – has anything to do with it, the H might not be recognisable. An italicised version is the most we could hope for. And that would be enough.

As I envisage it, the building would be a tribute to the letter itself, which has played a central role in the Northern conflict. Many concepts that are very important in Ulster begin with H, including heaven, hell, hate, hope, history, hunger strikes, and Hume-Adams, to mention just a few.

More humorously perhaps, it also stands for the great Northern qualifier, the word that almost inevitably follows any ostensible attempt to reach out to the other side and compromise, ie: “However” (or “Hoyever” as it’s usually pronounced).

But above all, the building would acknowledge the insidious role that the letter H has traditionally played in Northern Ireland, in signalling politico-religious affiliations.

Perhaps by the time the campus is finished, this phenomenon will be waning. All the more reason, I suggest, for the H-shaped building to house one of the North’s quirkier historical attractions: the Museum of Sectarian Identifiers.

Amusing and educational in equal parts, this would deal with everything from the Derry-Londonderry issue to supposed differences in the way members of the other community walk.

Sensitively done, it could be part of the reconciliation process, contributing to a situation whereby, in the words of yet another famous H, Seamus Heaney, “hope and history rhyme”.

That always sounded like a tall order to me. Getting hope and history to rhyme would be hard work in most English-speaking countries, never mind one where they can’t agree on whether to aspirate the Hs. Still, now that Peter Robinson and Martin McGuinness are friends again, anything’s possible.

It might be beyond the museum’s remit to explore the question of which side in the aitch/haitch debate is grammatically correct. This is in any case a vexed question. Most dictionaries back the Aitchers, but Haitchers can at least claim to have logic on their side.

After all, if it is so pronounced, Aitch is the only letter of the alphabet not to contain its own sound. And in fact, the very people who argue against Haitch are also the ones least likely to drop their fully-aspirated haitches at the start of words.

Imagine somebody from those genteel Co Down addresses of Holywood or Hillsborough saying “Olywood” or “illsborough”. No, you can’t. Yet the typical (or, all right, stereotypical) resident of those towns would sooner drink tea from a saucer that sound the H at the start of the letter.

As for anyone who insists on the immutable correctness of English pronunciations, I can only quote Shakespeare – Anthony and Cleopatra , Act IV. Scene VII, to be exact. Wherein a solder jokes grimly: “I have a wound here that was like a T, but now ’tis made an H”. This passed for wit in the 17th century, I gather, because the words “ache” and “aitch” were pronounced exactly the same then. So there.

The museum would deal lightly with this, if at all. But as part of its educational remit, it would mention the other roles played by H: as symbol for Hydrogen, as the Roman numeral for 200, etc. While they’re at it, the curators might include a lower-case “h”, the abbreviation for Planck’s Constant, even at the risk of having to explain it.

Back on safer ground, meanwhile, the museum would also show how sport makes the letter H accidentally central to life on this island. To wit: thanks to the GAA, and to a lesser extent rugby, upper-case Hs stand proudly at either end of at least one playing field in every Irish town and village.

Mind you, in the case of rugby, the bottom half of the letter is today a meaningless vestige. Like the silent P in psychiatry, the lower uprights of a rugby goalpost contribute nothing now except, occasionally, to get in the way.

They could easily be replaced – as in American football – will a single upright in the middle. And given that Ulster rugby tends to thrive in Aitch-speaking areas, there would be a certain irony here. Namely that a single-upright goalpost resembles another letter, which only for its lack of an aspirated H in the middle would sound like a question. I refer of course to Y.