An Irishwoman’s Diary: The first Banking Commission of 1934

The principal finding was simply to leave things as they were 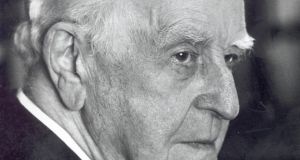 Seán MacEntee, minister for finance and chair of the 1934 Banking Commission

Eighty years ago, on November 23rd, 1934, a group of 21 men met together in Dublin. The group included a bishop, university professors, trade union officials, farmers, businessmen and civil servants. They were members of the Banking Commission which had been established three days earlier on November 20th, 1934 by the minister for finance, Seán MacEntee. The chairman of the commission was Cambridge-educated Joseph Brennan who had been the founding secretary of the Department of Finance.

One of the members, Per Jacobsson, later to become director of the International Monetary Fund described “the unforgettable quarters” at Number 1 College Street, where the Banking Commission held its meetings, “fourth floor, three flights up, seventy-two steps, no lift, an incredible noise from drays rattling over cobble stones, and trams clanking along, grinding, shuddering to a halt”.

Such was the physical environment in which one of the defining documents of Irish economic and social life, the Reports of the Banking Commission, was produced. In summary, the terms of reference of the commission were: “To examine and report on the system in Saorstát Éireann of currency, banking, credit, public borrowing and lending and pledging of State credit on behalf of agriculture, industry and the social services”.

According to Maurice Moynihan, secretary to the Government and later governor of the central bank, “Among some bankers, also, there lingered a feeling that the government and parliament now exercising jurisdiction from Dublin were, in some degree, on probation and that a monetary authority subject to their control might be under pressure to stray from the traditional paths of financial prudence”.

The Reports of the Banking Commission appeared in 1938. The majority report signed by Brennan, its chief author, and 16 members, exceeded 350,000 words. Three minority reports ran to 60,000 words. Two volumes of minutes of evidence came close to 1,500 pages.

The principal finding was simply to leave things as they were. The system of banking and currency was fine. The link with sterling was “the only possible policy”.

Press reaction was probably most accurately expressed by The Economist which observed that the commission had “very few important recommendations to make, save for the all-important recommendation to leave things as they were”. The Irish Independent lauded the commission, while The Irish Times, in reference to the membership of the commission, claimed that Éamon de Valera had “packed the jury” with those opposed to his policies, describing this action as “One of the mysteries of a rather mysterious career”.

Before the Banking Commission reported the new Constitution to which Moynihan contributed had been enacted in 1937. Included in Article 45, the Directive Principles of Social Policy which are for the guidance of the Oireachtas, is the following: “in what pertains to the control of credit the constant and predominant aim shall be the welfare of the people as a whole”. This is undoubtedly a worthy aspiration. But could it be said that it has guided the Oireachtas in any meaningful way in the intervening years?

Hopefully it will be seen as relevant by the Oireachtas Joint Committee of Inquiry into the Banking Crisis which was established earlier this year. The committee comprises nine men and two women from the Dáil and Seanad and is chaired by Ciarán Lynch T D. The committee started with a stumble as the government sought to ensure its majority. The committee has set itself the goal of reporting by November 2015. A general election is due at latest early in 2016 and if the Government is dissolved the joint committee is dissolved at the same time. So it is important that the Committee meets its goal in order to avoid waste and disillusionment.

The banking inquiry has been set up in the wake of a banking collapse. There was more than a single cause for the collapse but the absence of rules-based control enforced by the monetary authority and the simplistic acceptance of light-touch regulation contributed significantly to the debacle.

It’s hard to believe that a time existed such as described by Maurice Moynihan, when the banks regarded the Government to be on probation. But maybe over the years there has been undue deference given by the authorities to the bankers and not enough or indeed any attention to the policy guidance recommended in Article 45 of the Constitution.