Remembering those who returned 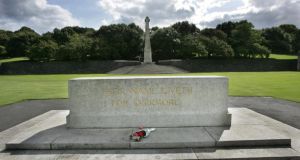 The war memorial at Islandbridge in Dublin. Photograph: Matt Kavanagh

When Nurse Elizabeth O’Malley volunteered for the first World War she could hardly have guessed that, almost a century later, her grand-niece would have embarked on an attempt to gather the names of every person from Ireland who returned alive from that war.

Sabina Purcell was so inspired by her grand-aunt’s story that she began the ambitious project more than two years ago. She has now gathered the details of some 30,500 veterans. From AWJ Abbott to Frederick William Zebedee, she has names from every county on the island, although Dublin, Antrim, Down, Kildare and Cork feature most prominently. Sabina has organised a remembrance service for veterans in Dublin this weekend that should help to add a few more names to the list.

According to her database, the age of enlisting varied from 15 years to those in their 40s towards the end of the war. As well as the British army, they enlisted with the US Army and the Canadian, New Zealand and Australian forces. A number also joined African and Indian regiments and enlisted with the navy, the air corps and merchant navy. Among those listed are cyclists, drivers, writers, chaplains, stokers, telegraphists, cooks, buglers, veterinary surgeons and air mechanics. David Agnew from Cavan was a farrier with the Army Service Corps. John Bannerman from Dublin was a stretcher bearer with the Royal Army Medical Corps. William Stewart from Derry was a drummer with the Royal Inniskilling Fusiliers.

Some women also make an appearance as you scroll through the names. They volunteered either as nurses or with the Women’s Auxiliary Army and the Volunteer Aid Detachment.

Sabina Purcell’s grand-aunt from Westport, Co Mayo, trained as a nurse in Jervis Street Hospital before volunteering with the Queen Alexandra Imperial Military Nursing Service in 1916. She said it was primarily to nurse but also for the adventure it would bring. At that time, there was a strict age lower age limit of 25. She was 24 but didn’t let this minor detail stop her and soon she was on her way to Aldershot hospital, the first hospital to receive soldiers directly from the front. “She told my mother that she nursed soldiers with horrific injuries,” Sabina recalls. “Many with limbs blown off and suffering from the effects of gas. Elizabeth also spoke of the trauma and the constant screaming of pain from the soldiers.” She was later sent to the western front in Europe and finally Basra. It took one month to get there from the UK, on a hospital ship via the Suez Canal with a stop-off in Bombay.

The heat and the flies were unbearable in the 250-bed hospital, which was made of tin and was trying to cope with 1,000 injured soldiers.

Like many veterans, her grand-aunt seldom spoke about the war after she returned to Dublin. She died in 1972. But the impact of the war is all too clear in the stories Sabina has heard from veterans’ relatives. Patrick Cranley served in Salonika with the Royal Irish Fusiliers and was diagnosed with shell shock when he returned. He committed himself into a psychiatric hospital and later died in St Ita’s in Portrane.

The daughter of Larry Devany told how rats crawled inside his clothes for warmth when he was in the trenches. Michael O’Hara’s relatives told how he was blinded in the Battle of the Somme after a shell landed close to him and blew him on to barbed wire.

After visiting the memorial gardens in Islandbridge in 2011, Sabina began looking for a list of the returned and was surprised one did not exist. There are various regimental lists but no comprehensive list of those who returned home.

Now that she’s well on the way to providing such a list, she has another plan. She hopes the two governments on this island will fund the building of a memorial wall that would be inscribed with the names gathered in the project. Given her success so far, it could very well happen. nThe ecumenical service to honour first World War