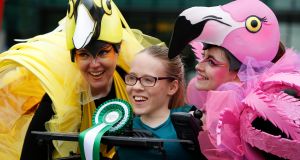 Performers from Artastic with Joanne O’Riordan (centre), who is to be grand marshal for this year’s St Patrick’s Festival parade in Dublin. Photograph: Robbie Reynolds 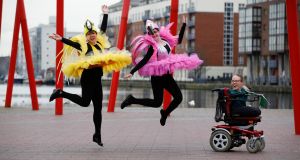 Performers from Artastic with Joanne O’Riordan (centre), who is to be grand marshal for this year’s St Patrick’s Festival parade in Dublin. Photograph: Robbie Reynolds

Disability rights campaigner Joanne O’Riordan has been selected to lead the Dublin’s St Patrick’s Festival parade on March 17th, making her the youngest ever grand marshal for the event.

Ms O’Riordan (19) is one of seven people in the world with Total Amelia, a syndrome in which individuals are born without limbs. She also has curvature of the spine.

The 2nd year student of criminology at UCC also appeared in the TV documentary No Limbs, No Limits in 2014, directed and produced by her brother Stephen.

Ms O’Riordan said it was a “dream come true” to be asked to lead the parade and that she was delighted about spending St Patrick’s Day in Dublin for the first time.

“I have been around the globe, to New York and Japan, giving the people with a disability in this world a voice,” she said. “To be able to come home and be the grand marshal in this parade - it helps the people of Ireland see it’s not the disability, it’s the ability. I am proud to be in the St Patrick’s Day Festival and I’m incredibly proud to be a voice for the voiceless.”

As grand marshal, Ms O’Riordan says she’ll have an even greater platform to talk about disability, technology and mental health.

“That’s my motto in everything - just take every opportunity that comes your way because you never know what door could open. To be able to advocate and show people it’s not the disability, it’s the ability of the person, that’s what matters.”

Asked about the development of Robbie the Robot - a robot being designed by engineers at Trinity College to assist Ms O’Riordan with everyday tasks - the Cork teen said the robot was in stage two of development but was still a few years away from completion.

“It’s pretty cool to see it in action and see it work.”

Chief executive of St Patrick’s Festival Susan Kirby described Ms O’Riordan as “a great ambassador for people young and old, of whatever ability, to live life to the full”, and wished her well on the day. “Joanne and her outlook on life are an incredibly powerful story and a message to share.”

This year’s St Patrick’s Festival will follow on from the three-year creative thematic series launched in 2014 to celebrate the past, the present and future.

The 2016 theme - Imagine If... - is the final instalment in the trilogy and will celebrate the future as part of the Ireland 2016 programme for Youth & Imagination.

The I Love My City cultural programme will also return this year with a series of literature, music, film, spoken work and design events in cultural venues and spaces around Dublin.

More than 112,000 people visited the State last year for the St Patrick’s Day festival, with 100,000 people travelling from abroad.