A hotel with a history

An Irishwoman’s Diary: 130 years of fishing, bathing and reading 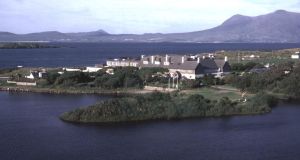 Hotel guests are attracted by different things over time. In 1906, shooting seals at Renvyle House Hotel in Connemara was billed as an attraction in that year’s Murray’s Handbook Ireland . The handbook noted, “In addition to being close to the finest scenery in Connemara, it has good bathing, sea and trout fishing, seal and mixed shooting.”

This year, Renvyle is marking 130 years of being in business, and while a guest today can still experience a combination of what Murray’s described as “the comforts of a family country house and the freedom of a hotel,” seals are no longer advertised for shooting.

The hotel featured again in Connemara , by J Harris Stone, also published in 1906. He wrote of Renvyle’s “old library, with books of certain and uncertain date, like many things in the British Museum, not a place for the acquisitive book lover to be left alone in”.

In 1912, Black’s Guide Book noted that a week’s stay at “Mrs Blake’s hotel”, Renvyle’s owner, cost £3 a week. As in Connemara , six years previously, the guidebook drew special attention to the hotel’s “famous library with many 17th and 18th century books, including a first edition of Raleigh’s History of the World .”

The books had come via family connections of widower Caroline Blake, who opened the hotel in 1883 to help with her Land League debts. In 1917, she sold the hotel to surgeon and writer Oliver St John Gogarty, who added his own books to the collection. Alas, if you visit Renvyle today, you will not find a single book remaining from its once-famed collection, unusual even then for a hotel library.

As John Coyle, the present owner explains, in 1922 the house was burned by anti-treaty republicans. Prior to being burned, it was looted for three days. Most of the furniture and artefacts were carried off, but the books and paintings were all burned. “The only book that survived was a first edition of Thomas Moore’s Utopia , which Gogarty had given to Trinity College Dublin as a gift.”

Gogarty rebuilt the house, and also ran it as a hotel for many years, while continuing to work as a surgeon. In 1953, Renvyle was bought by John Coyle’s father, Donny, John Allen and Michael O’Malley. Coyle recalls visiting Renvyle as a child, and getting car sick on the unpaved stone roads from Letterfrack. Facilities were basic. “There was a huge cast-iron stove in the kitchen that was still fuelled with turf,” he says.

The brochure from 1953 proudly advertises, “Hotel garage, electric light, hot and cold water, ponies and donkeys, croquet lawn”. There was “fresh milk and cream from the hotel herd, fresh vegetables and fruit in season from the gardens, eggs and fowl from the poultry run, and fish fresh from the sea”. Seals were no longer mentioned, but there was “free rough shooting for rabbit, snipe, woodcock, grouse, duck and wild geese.”

Gogarty died in 1957, and his burial to nearby lakeside Ballinakill graveyard was carried out by Tully Cross undertaker, Paddy Coyne. His son, Gerry, continues to run the long-established family bar in Tully Cross. Four years ago, while rummaging in the attic, he discovered old ledgers from the 1950s and 1960s, kept by his father, who also ran a grocery and petrol pump at the bar, in addition to his undertaking business.

The spines of the ledgers have come away, but the transactions recorded within are still clearly legible. Many of them are for orders from Renvyle. A box of kippers and tinfoil was 2/11d in 1966; tins of strawberries and peaches were 2/9d and 2/2d each, and four dozen oranges were 6/- in 1968.

The 1958 brochure announced new facilities in the hotel bedrooms. “Shoe cleaning. Shoe polishing and shining materials are in each room, just lift the lid of the wooden shoe rest.”

Guests were also informed that dinner was served from 7.30pm to 9pm, and that they were not to go hungry through politeness. “Don’t be shy, if you’d like a little more, please ask.”

By 1964, the literature for that year was particularly keen to point out one important addition to the hotel: “Central heating ensures warmth, should the weather prove unkind.” Ironically, in 2013, one of Renvyle’s most popular features are the twin open fires in its lobby, that guests cluster round, whenever the weather proves unkind, summer and winter.

When the hotel reopened in 1953, the brochure proudly stated that “not the least pleasant feature of Renvyle House is the unobtrusive, cheerful and willing service of all the staff.” Sixty years later, it’s still true.