From now until next year, a stream of online resources relating to the Rising will be available to schools and teachers who wish to introduce Ireland 2016 competitions and project initiatives to their pupils 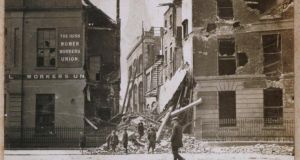 Bringing history to life: a photograph of ruined buildings in Dublin after the 1916 Easter Rising. Photograph: Royal Irish Academy

The DES programme for Ireland 2016

The Department of Education and Skills (DES) is coordinating the education sector’s input into the Ireland 2016 Centenary Programme. A number of initiatives and programmes are planned to commemorate 1916, celebrate Ireland in 2016, and imagine Ireland in the future.

Schools participation in Ireland 2016 initiatives is entirely voluntary, but the department strongly encourages schools to try to get as many young people involved as possible. Full details of these initiatives and additional information will be available on scoilnet.ie and on similar pages on the Professional Development Service for Teachers website, pdst.ie .

Summer courses and workshops for teachers on 1916 are available through the education centre network at ateci.ie. Some of these began in summer 2015 and will continue through 2016.

Supporting the nationwide distribution of national flags and copies of the 1916 Proclamation to all schools, a new resource on the national flag, containing lesson plans and information on the flag and its contemporary significance, will be available from October on scoilnet.ie.

Using the 1916 Proclamation as a foundation, primary and postprimary schools are invited to write a new Proclamation for 2016, to reflect the values, ideals and aspirations of the generation of 2016 and to be unveiled in each school on “Proclamation Day”, March 15th, 2016. A template will be made available to download from scoilnet.ie.

As part of the 1916 ancestry project, the National Archives has developed a resource on how to do ancestral research. This will be hosted at irishgenealogy.ie and will go live later this year. Schools are invited to upload the results of their 1916 ancestry project on to the Scoilnet website, at scoilnet.ie.

Each school is invited to unveil its ancestry projects on Proclamation Day.

The 2016 Abbey Theatre tour of primary schools with Me, Mollser, based on The Plough and the Stars, has curriculum-linked resources and workshops. Further information is available via email to memollser@abbeytheatre.ie.

The Decade of Centenaries schools history competition is now open to all primary and post primary schools throughout the island. Full details, and the template cover sheet for school projects, will be available at education.ie. Meanwhile, inquiries should be made by email to historyaward@mercierpress.ie.

The all-island schools’ drama competition invites primary schools to write a short drama based on the events of 1916. RTÉ and the Abbey Theatre will provide resource packs for teachers and children, to be found at abbeytheatre.ie, rte.ie/swipetv, and on Scoilnet.

The Ireland 2016 song competition is a partnership between the department and the National Concert Hall. Students are invited to write a song celebrating the multicultural Ireland of 2016. Full details can be found on the National Concert hall website at nch.ie/online/education.

The DES, the Department of Education Northern Ireland, the National Gallery of Ireland and the Education Centre Network are running an all-island schools art competition, based on the theme “Imagining the Ireland of 2116”. Full details of this will be available shortly on the education centre network, ateci.ie, and on Scoilnet.

The Libraries and Postprimary Schools 1916 Poetry Competition invites postprimary students to submit a poem on the wide-ranging theme, “Your Ireland”.

For details, see librariesireland.ie/services-to-schools, from January 2016.

Meanwhile, the Poetry Aloud All-Island Poetry-Speaking competition for postprimary schools, organised jointly by the National Library of Ireland and Poetry Ireland, will encourage poems on 1916 themes. Full details are available at http://www.nli.ie/en/udlist/programme-and-events-education-post-primary.aspx?article=8ea92d17-2d3c-405b-b026-10ea4420666c.

The Ireland 2016 Film Award is a partnership between the DES and the Dún Laoghaire Institute of Art, Design and Technology, and invites primary schools to submit a short film based on any aspect of 1916. Full details will be available on fisfilmproject.ie.

The Department of Education and Skills has supported the Royal Irish Academy (RIA) in developing postprimary lesson plans based on objects in the Irish Times/RIA series and book A History of Ireland in 100 Objects, by Fintan O’Toole. These will be available at 100objects.ie/portfolio-items/post-primary-lesson-plans.

The DES is partnering with national cultural institutions to produce lesson plans for schools, by the end of 2015, that tell the story of 1916 through cultural objects. This project is also supported by Century Ireland, which will have a dedicated 1916 website, rte.ie/centuryireland, giving day-by-day accounts of the events of 1916 as they happened.

Conradh na Gaeilge will be digitising the nationalist newspaper An Claidheamh Soluis (edited for several years by Pádraig Pearse), categorised according to county, so that schools can research articles from their area. The copies will be available on cnag.ie.

The department is supporting the National Military Archives and NUI Maynooth in developing a transition-year unit and resource for schools, based on primary source material held in the Military Archives and in the Letters of 1916 project. Check out dh.tcd.ie/letters1916and militaryarchives.ie.

The DES is supporting the Royal Irish Academy in making a selection of 40 1916 biographies available as free ebooks to schools. Further information will be available on Scoilnet in early 2016.

Thirty short films, made for RTÉjr and aimed at seven- to 11-year-olds, will look at life in the early 1900s. A reality documentary about surviving in 1916 tenement conditions will air in April 2016. There will be also be a crowd-sourced documentary focusing on Proclamation Day.

These programmes will broadcast on RTÉ2 and RTÉjr and be available across RTÉ’s range of apps and websites for young people. Check out rte.ie for ongoing details.

n Full details of all of the initiatives mentioned above, and more that are likely to come on stream soon, will be found on

scoilnet.ie. More events, projects and resources for schools can be explored at the Ireland 2016 website, ireland.ie. 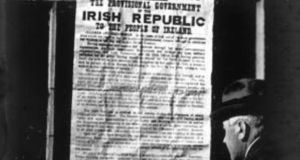 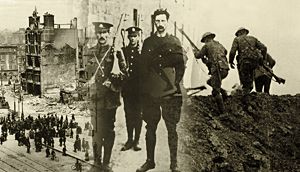