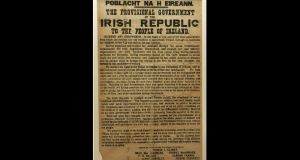 Prof John A Murphy said that the Proclamation, read on the steps of the GPO by Patrick Pearse, has received “precious little analysis outside of scholarly circles”. File photograph: Dara Mac Dónaill

The Easter 1916 Proclamation is not an original charter of human rights for modern Ireland and needs to be viewed with a far more critical scrutiny than it has received to date, Emeritus Professor of History at UCC, John A Murphy said on Friday night.

Prof Murphy said that the Proclamation, read on the steps of the GPO by Patrick Pearse, has received “precious little analysis outside of scholarly circles” and in reality there is “less to the Proclamation than meets the eye”.

Speaking at a symposium organised by the Church of Ireland Diocese of Cork, Cloyne and Ross to mark the 1916 centenary, Prof Murphy said that while a Proclamation Day had been fixed and copies given to schools there was no indication the document would be critically examined in schools.

He pointed out that the phrase “cherishing all children of the nation equally” has been misinterpreted as referring to children and social justice issues when it was designed to reassure unionists that they would be on the same footing as nationalists in an independent Ireland.

“Essentially, it is a restatement of the fundamental principle of the United Irishmen. Be it noted that the Proclamation accepts as axiomatic the false nationalist assumption that the island of Ireland comprises only one nation,” Prof Murphy said.

The 1916 Proclamation is much less radical than its Fenian predecessor of 1867 when it came to the issue of guaranteeing religious and civil liberties and equal rights which merit only a line or two as it focuses instead on national independence, sovereignty and territoriality.

“These [religious and civil liberties and equal rights] are hardly startling new values, being part of Western democratic heritage since the American and French revolutions and, less dramatically, expressions of a slowly evolving British constitutional democracy,” he said.

Observing that the word “democracy” does not appear in the Proclamation, Prof Murphy said the most radical aspect of the document is that of gender equality with its references to “Irishmen and Irishwomen” and its pledge the national government would be elected by both men and women.

Yet another notable feature is “the impressive comeback of ‘The Most High God’” as the 1867 Fenian Proclamation reflected that organisation’s “coolness on matters religious” with an emphasis on the separation of church and state where it stressed “absolute liberty of conscience”.

When people mistakenly attribute specific social ideals, especially involving “children”, to the 1916 Proclamation, they may be confusing it with the Democratic Programme of the First Dáil in 1919. “Now that spells out a radical plan, especially for the material welfare of the children of the nation.”

Prof Murphy noted the 1919 programme stated the Government had a duty to provide for the welfare of children so that they do not suffer hunger or cold but these “fine and specific, aspirations were ignored by mainstream nationalists then as no doubt they will be in 2019”.