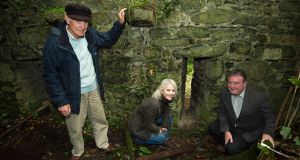 How do you not notice a 17th-century castle hiding in plain sight in the middle of your town? That’s a question the people of Clones, Co Monaghan, are asking themselves following the discovery of a four-storey plantation castle behind a terrace on the main street.

A 1741 drawing of Clones, held in the National Library, shows many ruins and archaeological features, including an impressive castle. However it was thought that all that was left of the building was subsurface remains.

That was until local volunteer historian George Knight and Monaghan county heritage officer Shirley Clerkin took a wander down behind the now obviously named Castle Street.

Clambering over brambles and barbed wire, they found themselves at the base of a four-storey four-sided tower sitting on a large plinth, covered in ivy.

“Clones is built on top of a drumlin, it’s a very steep drop and the castle is before the next slope,” says Clerkin, adding that she once stood on top of a church right beside the castle and had not noticed it.

Several massive stone walls have now been revealed. They form part of an investigation to uncover the truth about the site, which was recently purchased by Fáilte, a support group for prisoners, which supported an application by Clones Community Forum to the Heritage Council grants scheme to employ an archaeological team to start figuring out the extent of the castle.

Fáilte has been clearing back the site following instructions from the archaeological team in preparation for an open day next week as part of Heritage Week, the first day that the castle is on view to the public.

“What we think we have here are remnants at least three storeys high, with musket loops all the way up,” Clerkin says. “There’s also a tunnel going underneath the steps.”

She believes it was possibly the townhouse of a prominent planter family, the Lennard-Barrets.

Even if the unusual topography of Clones and the heavily overgrown site contributed to the castle lying hidden for so long, it seems remarkable that there was no local folk memory of its existence.

Clerkin says some people had believed the site contained the ruins of an old piggery, but she also makes the point that “you’re dealing with a Border town here. Things are not spoken about.”

Another contributory factor is that the population of Clones has dwindled in recent decades, she adds. None of the houses that make up the 18th-century terrace on Castle Street is now in residential use. The new discovery however highlights the Border town’s particular historical resonances.

“Clones is a very interesting place,” Clerkin says. “We have a motte-and-bailey, a high cross, a round tower and a Georgian terrace. What we were missing was a plantation castle.

“Why would you go to a folk park to see a recreation of all this when you have the real thing here?”

The Clones Plantation Castle open day is on Thursday, August 25th, from 12pm-4pm

Dublin Fringe Festival 2020: Making lemonade in a year of lemons
Browser: Lively fictional retelling of a fateful year for Ireland