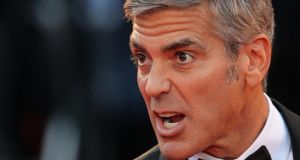 George Clooney: ‘If guys like this are given any weight because they’ve bought stock, this does great damage.’ Photograph: Gareth Cattermole/Getty

Onscreen, George Clooney has played a few heroic parts, but he seems to have a fondness for characters whose charms are balanced out by a ration of self-doubt or idiocy. There is Jack Foley, his bad bank robber/gifted escape artist in Out of Sight; his charismatic presidential candidate with feet of clay in The Ides of March; and the likeable-but-dim Ulysses Everett McGill in O Brother, Where Art Thou?

Offscreen, there is little of that insecurity and perhaps even more of the charm. He has evolved an almost bulletproof public persona as a bona fide star who can occasionally redirect some of the wider press interest in his well-maintained status as the world’s most eligible bachelor towards causes he advocates for, most notably the plight of the people of Darfur. This week, however, in a strategically chosen interview with Deadline Hollywood, he put his head clearly above that film-industry parapet by taking on Daniel Loeb, the grandstanding founder of hedge fund Third Point, who has been mounting a public challenge to the leadership of film studio Sony.

Loeb provoked Clooney’s ire with a recent missive that advised Sony, in which Third Point has a minority shareholding, to spin off its entertainment division in the wake of the poor box-office performance of two recent Sony blockbusters: White House Down, starring Channing Tatum and Jamie Foxx; and After Earth, starring Will Smith.

Loeb castigated the leadership of the film division as part of his campaign to pressurise Sony to yield to Third Point’s larger plans for the conglomerate. (Sony’s board replied by voting unanimously to reject Loeb’s suggestion.)

Letter-writing seems to be Loeb’s weapon of choice in disrupting boards that do not submit to his will. A Bloomberg profile has described him as “Wall Street’s merchant of venom, pillorying chief executive officers who don’t make him enough money”. And it works: Loeb’s withering public critiques have previously forced a change in the leadership of Yahoo.

Clooney on the attack
Now, though, it’s Loeb who is on the receiving end of a public attack. Clooney has just finished shooting his latest film for Sony. The Monuments Men deals with the securing of looted artworks during the collapse of the Third Reich. The actor laid into Loeb. “[He] calls himself an activist investor, and I would call him a carpet bagger, and one who is trying to spread a climate of fear that pushes studios to want to make only tent poles.”

Warming to his task, the two-time Academy Award winner continued: “To have this guy portraying it that Sony management is the bad stepchild and doesn’t know what it is doing and he’s going to fix it? That is like Walmart saying ‘let me fix your town’, putting in their store, strangling all the small shops and getting everyone who worked in them to work for minimum wage with no health insurance.”

Clooney widened the discussion to the broader effect of overlaying shareholder logic on how movie studios operate. “If guys like this are given any weight because they’ve bought stock and suddenly feel they can tell us how to do our business – one he knows nothing about – this does great damage, then trickles down. The board of directors starts saying, ‘Wait a minute. What guarantee do you have that this movie makes money?’ Well, there are no guarantees, but if you average out the films Will Smith and Channing Tatum have made, you will take that bet every time, even if sometimes it just doesn’t work out.”

Clooney’s comments echo recent remarks by his frequent collaborator, director Steven Soderbergh, in a speech made at the San Francisco International Film Festival. Both men diagnose a bottom-line-driven fear informing the studios’ reliance on comic-book superhero movies and their unwillingness to experiment with lower-budget dramas.

Clooney’s tirade has hit home, with Loeb tempering his comments about Sony’s performance, and Sony rejecting his proposal. However, this is a skirmish in what will surely be a longer war. Soderbergh says he is resigning from filmmaking (though he is about to direct a television series).

In light of Clooney’s comments, the performance of The Monuments Men will be under even greater scrutiny by a Hollywood press corps that is perhaps more obsessed with opening-weekend box-office numbers than artistic accomplishment.

Any perceived failure in the film’s performance will probably be served up with relish by Loeb as a justification of his proposals for transforming Sony.

Science and the humanities in the time of pandemic: better together
7 Mrs Kennedy, I presume?
8