Going out: the best of what’s on this week 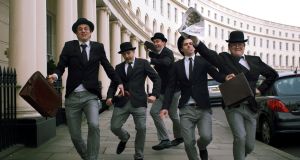 Yeats & the West
The Model, Sligo Until May 12
themodel.ie

The idea of the west of Ireland, as much as the reality, was vital for WB Yeats and Jack B Yeats. This co-operative project, involving the Model and NUI Galway, considers WB’s involvement with the Irish west through a wealth of documentary and artistic material. These include a display of the Model’s recently acquired Cuala Press Broadsides, designed by Jack B with hand-coloured illustrations. There is a detailed accompanying programme of lectures.

Californian brothers Dave and Phil Alvin – co-founders of seminal 1970s-1980s LA punk/roots band The Blasters – team up and return to their blues/country roots. Their most recent albums , Lost Time, and Common Ground will undoubtedly be rifled for songs, while choice selections from The Blasters’ back catalogue are also forthcoming.

Gillian Lawler was so taken with the strange story of the town of Centralia in Pennsylvania that she was drawn back there to make a substantial body of work about it. Now abandoned by all save one or two inhabitants, its problems began in the 1960s, when an underlying seam of coal started burning, creating sinkholes and waves of noxious gases. The town is still in the throes of slow-motion destruction.

This year’s MusicTown festival wears its inventiveness on its sleeve with this vast coalition of emerging bands. They take the music to uncharted waters, where linear notions of genre are irrelevant. Featuring Danny Diamond and Slow Moving Clouds, Lynched, Skipper’s Alley, Ye Vagabonds, Lynched and Twin Headed Wolf.

Now here is a creative take on Handel and his relationship to Ireland. This is the first in a series of concerts exploring the music that Handel would have encountered during his 1741 visit. The engine room of this exploration is populated by the best traditional and classical musicians in the country, including Dónal Lunny, Kate Ellis, Eamonn de Barra and Adrian Hart. Expect much by way of coalescence and little by way of unbridgeable chasms.