The best of what’s on around the country this weekend, including Stars of the Lid , Eve Risser and Phil Hartnoll 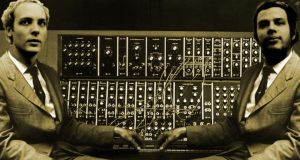 Slam
Hangar, Dublin 10.30pm €15/€12
When it comes to techno luminaries, Slam’s Stuart McMillan and Orde Meikle are very much in the top division. DJs since the late 1980s, they’ve expanded into labels, (Soma, the imprint which gave Daft Punk a start in 1995), productions (tracks like Positive Education remains peerless) and festivals, with the long running Slam tent at T In the Park. They’ve been coming over to Dublin for a couple of decades now and they’re joined by Luke Xander, Eoin Donovan and Jake Nolan as support on the latest jaunt.

Galway Jazz Festival
Various venues, continues until Sunday, gjf16.com
After several years in the wilderness, the Galway Jazz Festival is back with a varied and artistically credible programme running all weekend, much of it free. Intrepid vocalist Lauren Kinsella (Friday), respected UK saxophonist Andy Sheppard (Saturday) and Norwegian composer Christian Wallumrød (Sunday) headline, alongside new projects and old from the humming domestic scene, including pianist Izumi Kimura, guitarists Aengus Hackett and Joe O’Callaghan, and jazz-meets-hip-hop monsters Mixtapes from the Underground.

Antal
Electric Galway, 11pm €10/€8/€5 electricgalway.com
Another week, another A-list contender from the Netherlands making an Irish appearance. This time, it’s the turn of Antal Heitlager to show us why things are so hot with the Dutch right now. An experienced and versatile DJ, Heitlager has been whipping up diverse sets for around 20 years which are full of thrilling twists and turns. Aside from the night-time gig, Heitlager also runs Amsterdam’s hugely respected Rush Hour label and shop.

Eve Risser
Triskel Christchurch, Cork (Friday); Hugh Lane Gallery, Dublin (Sunday)
French pianist Eve Risser is the sort of musician who is as likely to reach under the lid as she is to strike the keys of her instrument in search of new sounds. The 33-year-old has been one of the rising pianists on the French scene for the last 10 years, playing with quirky drums and piano duo Donkey Monkey, the Orchestre National de Jazz and her own White Desert Orchestra. Expect plenty of invention and not a whole lot of convention.

Hard Working Class Heroes
Various venues, Dublin Also Fri hwch.net
It’s the final day of this year’s HWCH’s festival, giving you a chance to sample the best upcoming acts on the local scene. For those looking to work in the industry, the festival’s convention has an excellent lineup of expert voices to learn from. Today’s highlights include Chris Douridas from KCRW in Santa Monica, one of the best stations in the US for new music; an excellent lineup on making music videos, featuring Brendan Canty, Christian Tierney, Michael Pope and Ryan Wyer (the 12-year-old who has worked with Aphex twin); and an excellent closing panel on how to get some longevity out of life in a band.

Imram
Tivoli Theatre, Dublin 8.30pm €10 imram.ie
The relationship between the spoken word and Irish traditional music is a rich and complex one. Tonight, as part of the ever-inventive Imram festival (a celebration of Irish language literature and music), piper, Eoin Dillon (he of Kíla) will air tunes from his new album, the odysseyan Pondelorum. With Graham Watson and others.

Tw!tch Is 10
Queen’s University Belfast 5pm £20 twitchbelfast.com
10 years, 10 artists, 10 hours is the sales pitch as Tw!tch celebrate a decade in business in a city that likes long-running club institutions, given the ongoing success of Shine. It’s a fantastic line-up all in all, with the likes of the mighty Steffi, Joy Oribison, Paul Woolford, Kowton, Pangaea, Timmy Stewart, Antal and Virginia making merry. Naturally, the Tw!tch residents will also be in the mix.

Phil Hartnoll
Opium Rooms, Dublin, 11pm, €15/€12 facebook.com/philhartnoll
Phil Hartnoll will be helping Abstract celebrate their fifth birthday tonight. Aside from his days filling big fields with his brother Paul during Orbital’s pomp, Hartnoll also established himself as a well respected DJ mixing house, breaks and techno. Support from George Feeley and James Hannan with Fish Go Deep at large in the Garden.

Come with me, I’ll show you something beautiful / Komm mit mir, Ich zeig’ dir ‘was Schönes’. Yanny Petters
Olivier Cornet Gallery, 3 Great Denmark St, Until November 6th (noon-5pm Sundays), oliviercornetgallery.com
Yanny Petters is justly renowned as an exceptional botanical artist or, to put it another way, artist. This body of intricate Verre Églomisé paintings (Scabious, right) – paintings on glass – is dedicated to her mother, Wilma Petters, and celebrate her love of nature and sense of curiosity and scientific enquiry. “My mother often said, “come with me, I’ll show you something beautiful”, Petters recalls. Usually it was small detail in the garden that might otherwise be easily overlooked.

Stars of the Lid
National Concert Hall, Dublin 8pm, €25 nch.ie
Stars of the Lid is one of the most innovative ambient music units of the past 25 years. This concert features new and old works, accompanied by the Echo Collective string ensemble, visual projections, a vintage Moog 55 Modular Synthesizer, and German lighting design by MFO. Special guest is The Gloaming and This Is How We Fly member, Caoimhín Ó Raghallaigh. NB: Prior to the concert, there is a public interview for ticket holders with SOTL members Adam Wiltzie and Brian McBride.