Bursting with research, Valiant Hearts is a sincere, quirky and smart 2D puzzler 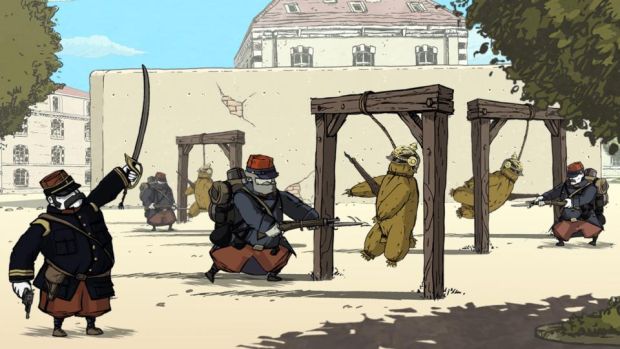 Valiant Hearts: The Great War is a paradox. “Freely inspired by the events between 1914 and 1918,” the game is the main story is outlandish and implausible, yet bursting with research and detail. Ultimately, it’s a warm and poignant tribute to those who fought.

This is a 2D side-scrolling, puzzle game. You play as four different people (and one adorable dog) whose lives intersect in the conflict.

Life during wartime means making the best of what you have, and much of the problem-solving involves finding improvised uses for old items such as using a shovel for a crutch, a flag for a bandage or a bone for a handle.

The heightened world of Valiant Hearts takes this even further, including a weird fight where you hit church organ keys to blast an enemy with its twisted pipes. You’ll spend much time working handles or cogs, or thinking laterally and paying close attention to background details. Other times the work grislier, such as sawing a poor soldier’s limb.

It’s presented beautifully, with a unique animation style and sound. The characters are boxy and burly, with brows so furrowed that you can’t see their eyes. The music is melancholy and eccentric, using delicate piano, warm accordions and stirring strings. And the narration, from veteran voice actor Dave Pettitt, is rich and sombre.