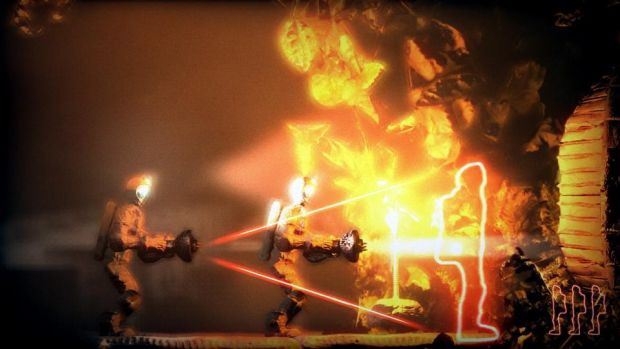 From the first chords you hear in The Swapper’s menu, its tone is clear – sombre but graceful. Belying its 2D, low-key appearance and sound, it’s a gameof striking ambition and imagination.

You play an astronaut who’s lost in a vast space station with no (initial) sign of intelligent life. Exploring the vast living space seems impossible at first, until the hero discovers the eponymous gun – a “swapper” that creates clones that you can then inhabit. Generate a clone in a hard-to-reach place, and simply zap your mind into its body.

The clone-swapping device is both a neat game-play mechanic and a compelling piece of storytelling. Initially, causing a clone of oneself to die is a strange and heart-rending experience. Then, as you use clones to test the safety of steep drops and dangerous traps, you become cavalier with their lives. The puzzles are inventive, challenging and satisfying. I also love that it switches to slow motion when you’re using the clone ray, giving you time to take in the ramifications of your action and act accordingly. For the most part, it’s about smarts more than skill.

The Swapper is also poignant in the way it makes you complicit in the character’s actions and asks you to become increasingly ruthless with clones of yourself. Is it mass murder, mass suicide, or does it not matter because clones don’t have a soul? Along with such moral conundrums, the game is peppered with existential notes such as “What are thoughts? They must have rules”.

Along with the thoughtful gameplay, The Swapper offers a tantalising and fresh sci-fi story. As the space station unfurls a variety of rooms, physics and surprises, it achieves what the best games and sci-fi do – the feeling of infinite possibility.

Mixing stimulating, philosophical sci-fi with smart puzzles, The Swapper is a gem, and one that deserves to be mentioned in the same breath as modern classics such as Limbo, Brothers and Braid.

Crainn na hÉireann: ‘Is dual dóibh an urraim is dual do rí’