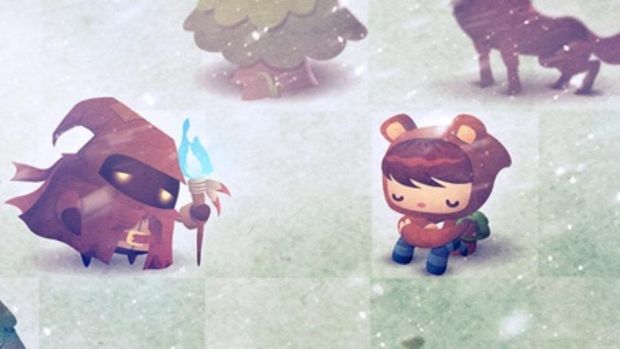 Remember the old riddle involving the fox, the grain, the chicken and the boat? You can only move one item at a time, but you can’t leave the chicken with the grain or the fox with the chicken. Now imagine endless riddles along the same lines , moving items to the right place so they’ll work in harmony while avoiding conflicting pairings. That forms much of the gameplay for Road Not Taken.

You play a silent, hooded traveller who returns to a village every year. Children are lost and you must find them in an enchanted forest with its own set of rules. For instance, some paths will only open when certain items are clumped together. Don’t put a wolf near a deer, though, and watch your energy levels when moving rocks.

The screen is gridded, and it looks like a cross between a children’s book illustration, a top-down adventure such as the original Zelda, and the game ilomilo. As well as the puzzle-based play, you talk to the villagers between quests, making “acquaintances” who eventually upgrade to “friends”, who in turn might give you helpful items and much-needed power-ups. Who would have thought that saving children would be so gratifying?

Even so, there’s a sting in the tail, as you sometimes have to cut your losses and quit the mission so you won’t die, leaving the quest incomplete and children abandoned. So these challenging puzzles are laced with harsh moral dilemmas.

The Robert Frost poem that inspired the title is referred to (both directly and indirectly), and there’s nice use of language throughout: A kitten, for example, is described as “an adorable balm for this mortal coil”. spryfox.com

Major promoters among recipients of funding for live performances