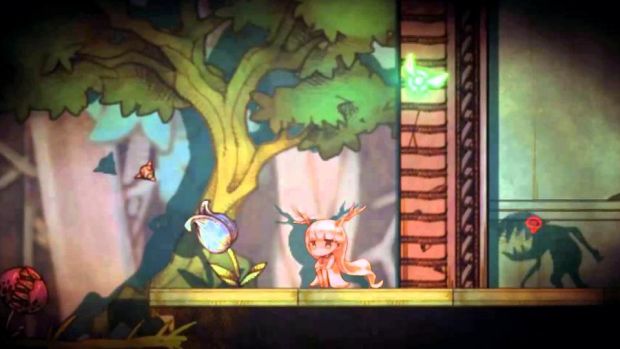 In the interest of even-handedness and transparency, let’s kick off this review with full disclosure: htol#NiQ: The Firefly Diary is a 2D puzzle game, which is a genre I love, and I also have a soft spot for Manga-style illustrations and vulnerable videogame protagonists. This Japanese title delivers on its initial promise, with a captivating and dark fairy-tale game that makes great use of the Playstation Vita’s controls.

She has two helpers – fireflies which are controlled by the PS Vita’s touchscreen. There’s a “light” firefly, and a “dark” one. The latter operates in shadows, and you alternate between the surface world and the shadow world by touching the back or the front screen of the Vita.

Even though the character animation in HtoL#NiQ can be a little stilted, the graphics are gorgeous, like a gothic Manga children’s book. The controls are unusual, and sometimes frustrating. The girl has no autonomy, and follows the dragonflies wherever they go. So you light a path up ladders, around obstacles and towards appropriate switches, lifts and pulleys. Careful, nimble digits are required, as the girl will happily walk off a ledge to her doom if you’re imprecise.

HtoL#NiQ feels magical and otherworldly, with lovely ambient music and an intriguing, mystical story. It tells its tale without words, confidentially allowing its visuals to slowly fill in the narrative blanks. And, despite being silent, its heroine is an unreliable narrator, as you don’t know whether these dragonflies and shadow monsters are real or imagined.

It might be too genteel for some gamers, and the control system won’t suit everyone, but this is a singular game with a gently compelling story and an array of clever, satisfying puzzles. A gem.