Breath fire, rob from the people and add to a giant reptile’s hoard. Grand Theft Dragon, anyone? 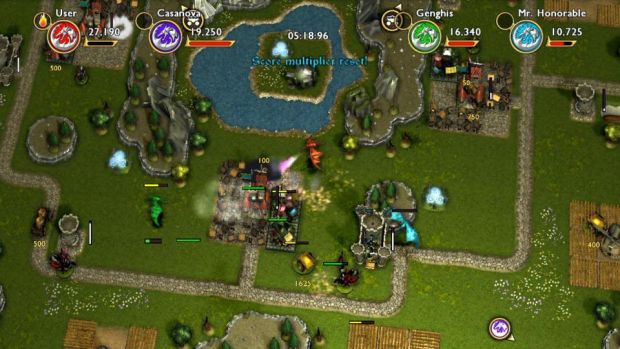 Tyranny shouldn’t be this funny and cute. Hoard is a top-down, strategy/action game in which you play a dragon that terrorises mankind and steals their precious gold. Unsurprisingly, you have an advantage over puny humans, with your fire-breathing, flying and thick, scaly skin. But you also have to contend with pesky knights, archers, giants, wizards, thieves and rival dragons.

Hoard is the very definition of a good idea well executed. It hits the sweet spot that action/strategy games strive for by being intuitive and easy to pick up, but also sophisticated and clever.

Gameplay consists of flying around, burning down carts, buildings, crops and more, and taking possessions to your hoard of treasure.

The action is in dodging, catching or killing your enemies, while there are numerous ways to strategise. For instance, leave a town alone and they’ll have time to become prosperous, but leave them too long and they’ll start hiring archers. In other cases, you can terrorise a town without destroying it and they’ll pay you protection. You can even kidnap a princesses and (to quote the onscreen tutorial) “protect her until she turns into ransom money”.

Hoard has a low-fi, appealing presentation. Its appearance is basic, but attractive, resembling a 16-bit game from a bygone era (Civilisation II, for instance). The music is catchy and serviceable, with hints of medieval lutes and organs.

You can play Hoard in multiplayer, either in co-op or competitive mode, local or online, so you’re either competing with other dragons or sharing your resources and power. Watching towns grow and crops flourish, and then burning them down and robbing them, feels somewhat subversive. It’s almost as if a tame strategy game such as Farmville has been invaded by playable, giant fire-breathing reptiles. Of course, just about every game could benefit from the addition of giant, fire-breathing reptiles.