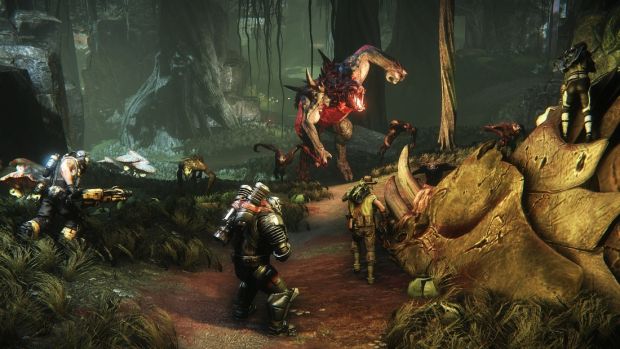 As Charles Darwin helpfully taught us, evolution is incremental, but very noticeable when you know how to look for it. For instance, one of the best games of last year, Titanfall, felt like a leap forward in its genre by combining military shooter with a giant-robot beat-em-up. Evolve seems like an (ahem) organic extension on Titanfall - it takes familiar gameplay elements and gives them a novel twist.

This game is fun from the moment you start the tutorial: You choose between playing a giant monster or its hunters. As a monster, when you level-up you evolve and grow more powerful. The game has an internal food chain, so you can eat lesser creatures for energy and power-ups.

As a hunter, you’re a member of a team categorised into “assault,” “trapper,” “medic” or “support”. Each hunter has their own specialties and pros and cons. Like 2K’s fabulous Borderlands games, Evolve has a nice variety of playable characters regardless of your playing style. Do you prefer setting traps, helping teammates, or just emptying big guns into slimy animals?

If you’re a human, Evolve looks and plays like a traditional first-person, sci-fi shooter. But if you’re playing as the hunted, you get a broader view of the landscape and it’s a third person (third monster?) action game.

Evolve has an embarrassment of choice when it comes to the gameplay, with abundant weapons and creatures and a malleable environment. When you play a campaign; the environment changes based on the outcome of each hunt. So if you fail to kill the monster, it will evolve and become deadlier the next time you meet. Dams break to unleash giant killer eels; protected bases become more resilient; killer plants grow, and so on. There 800,000 possible combinations of outcomes for subsequent rounds depending on how you play. And the military campaign continues even if it’s a total disaster (just like in the real world).

The game is fast-paced and violent, but it lands on just the right side of chaotic. And it encourages smart, tactical gameplay as well as a true aim and knowledge of what weapons to use.

There are some minor complaints: The colour palette is a little bit dark, making some crucial details elusive in key moments. And there are occasions when you’re spending too long running through foliage and staring in the mud for animal tracks, instead of throwing down against a giant monster.

Also, Evolve has a great set-up for storytelling, which it doesn’t fully exploit. It could’ve been a thought-provoking hunter/hunted story that brings us both perspectives and makes us question our own motives. But instead, it’s more of a straightforward macho sci fi story.

Still, it’s hard to grumble about a game that plays so well. Evolve is an energetic and distinctive multiplayer or single-player action game, and the controls are both user-friendly and sophisticated. Whether you’d rather play as a fire-breathing monster or its fearless hunter, it’s a strident, confident and grandiose celebration of slimy, deadly behemoths and the men and women who stalk them.