Level up, traverse platforms and fight monsters in this likeable retro game 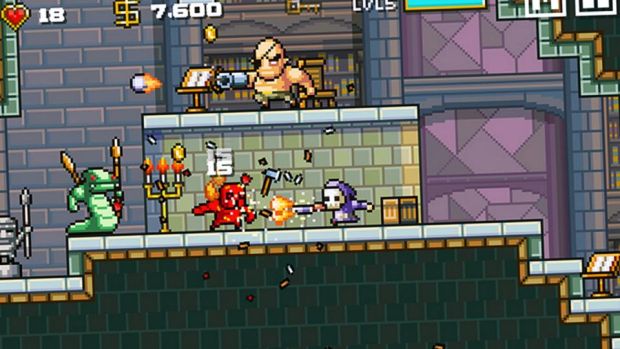 Of all the influences that gaming has had on the outside world, “levelling up” might be the greatest. Whether you’re accumulating Twitter followers, Facebook friends, or improving the grade of your videogame avatar, levelling up is always gratifying.

Devious Dungeon 2 borrows some elements from bigger-budget, AAA games (including the level-up), but at its heart, it’s a retro, 2D 8-bit platform/action game. Treasures and danger are waiting in an ominous castle, the opening text tells us, before asking: “Can you defeat the summoner and claim the lost treasures of the castle?”

Resembling Commodore 64 classics such as Ghosts ’n’ Goblins as well as more recent games such as Volgarr the Viking, the gameplay amounts to exploring a level, avoiding and killing enemies, and finding a key to unlock the exit to the next level. Coins are scattered throughout the game, which you can spend on armour, weapons and whatnot. You can also buy virtual coins with very real money via micro-transactions, should you want to.

Devious Dungeon 2 is a nifty little game. The platforming, combat and exploration work perfectly, the difficulty level is just right, and the levels are randomised, so you can’t just memorise where all the danger is and come back and conquer it.

This is a modest, but very endearing retro game. And since it’s priced at less than a euro, you won’t have to rob castle treasure to fund your adventure.