Priceless paper trail or total write off? That depends on what you’re looking for, says Beckett scholar Stanley E Gontarski 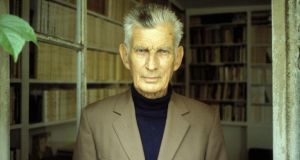 On the morning they were first revealed, in a glass display case in the dark splendour of the Long Room in Trinity College Library, two academics leaned over a newly acquired collection of Samuel Beckett’s manuscripts and squinted hard at his handwriting. “My God,” one said to the other. “It’s almost as bad as Yeats.”

This is one of the dread realisations a literary scholar may face when coming in close contact with the original works of their subject. No matter how opaque or inscrutable the artworks are thought to be, penmanship can be infinitely more challenging.

Gradually, though, an eye will adjust to pick out the details in Beckett’s minute, slanted scrawl in his correspondence with Stanley E Gontarski, Professor of English at Florida State University. Gontarski first wrote to the playwright in 1972, when still a graduate student at Ohio State University, and his deferential, erudite letter enquiring about the early drafts of Beckett’s play Happy Days is currently on display as a sampling of the manuscripts and correspondence Trinity has acquired from him. Beckett was as economical with his answers as he was with paper, underlining the queries in Gontarski’s letter and replying in the margins: “Don’t know”, “No”, “Don’t recall”, “Not that I remember”. Beckett writes an apology below: “Dear Mr Gontarski, I am sorry to be of so little help. I remember very little about the genesis of my writings. They cease to interest me as soon as finished . . .”

He would go on to establish himself as a preeminent Beckettian scholar, fascinated first with what he calls “the biography of texts”, the evolution of ideas and intentions through successive drafts of an author’s work (a paper trail that has become much harder to trace in a digital age). This developed into a relationship with the author that was academic, professional and personal. Gontarski was not the first person to ask Beckett to write a new dramatic piece, but he was one of the very few that Beckett furnished with something. “Sometimes naivety works in your favour,” he recalled in the Long Room.


A gift
There would be 500 Beckett scholars in Columbus, Ohio for an international symposium held in 1981 in honour of Beckett’s 75th birthday. “You should give them a gift,” Gontarski suggested. Beckett made no promises, but later began to inform Gontarski about his progress: “On to something . . .” “Fizzled out . . .” “No hope . . .” At a lecture in Trinity, largely attended by academics, Gontarski recalled the surge and dip of Beckett’s successive correspondences, then added, to knowing laughter, “The good news was that I was accumulating letters.”

Looking now at the four drafts of the resulting play, Ohio Impromptu – the earliest written by hand, the others typed out with annotations and revisions in pen – is to experience a little of the scholar’s thrill. The play features an almost indistinguishable Reader and a Listener, in long black coats with long white hair, pursuing a story of an abandoned man who moves from the place he had lived “so long alone together” to a single room by a river. In one draft, a line full of clues and references – “Stay where you are Mortimer, my ghost will comfort you” – is scratched out and altered to the much more ambiguous, “Stay where we were so long alone together, my shade will comfort you.”

It is thought to be one of the most personal of Beckett’s later works – referring as much to his relationship with James Joyce as to his wife, Suzanne Déchevaux-Dumesnil – but, as Gontarski has long argued, Beckett seems to be writing himself out of the text.

Yet Beckett, a meticulous correspondent, had always been helpful to academics. “There were clear ground rules,” recalls Gontarski. “He had no interest in talking about meaning – that was well established – or things of that nature. But he would talk about everything else. The notion of this silent, austere, monastic, depressed figure just runs counter to every meeting I ever had with him. He was affable, funny, interested in what you were doing. He would spend a lot of time talking about gossip, mostly theatre gossip.”

If Beckett was reluctant to discuss meaning, he would nonetheless readily supply details or clarifications. “Not intended,” he wrote next to some of Gontarski’s interpretations of Endgame , marked with an intimidating “X”, while they worked on The Theatrical Notebooks together (which was not to say they were wrong). Elsewhere he would offer up his inspirations – a Thomas Moore song, Oft in the Stilly Night , for instance, influenced his last play, What Where . While in Dublin, Gontarski visited the National Gallery to inspect Rembrandt’s The Rest on the Flight into Egypt , the austere palette reminiscent of Ohio Impromptu ’s setting. “You look at that and say, ‘That’s Beckett’s late work right there.’”

Interpreters tend to look for concrete references in Beckett’s work, either biographical or textual, because meaning seems so elusive. “It’s a good place to start,” Gontarski says wryly. But the study of Beckett’s work, he knows, is also endless. “Here is something I can study all my life, and never understand,” says one of the characters in Molloy , contentedly, about the mysterious dance of bees. Now that he has turned over his Beckett collection to Trinity – effectively, Gontarski’s life work – has the pursuit been satisfying?

No end in sight
“It depends what you’re looking for. If you are teleologically oriented – that there’s got to be some product at the end of this – that’s the frustrating part. But if you’re willing to accept that it’s all process, which I do, then all an authoritative interpretation does is close off the process. As long as one is not trying to come up with a definitive meaning of this work, but trying to get at how it works.”

Beckett’s works were always evolving, he says, on page and on the stage, and giving new scholars access to these papers allows that to continue. “I think that’s Beckett’s hope too, that people keep rethinking the work. That’s what disturbs me a little bit about certain theatre productions that have settled into a mode, reproducing a classic rather than testing the potential of this work of art.”

Trinity College has also received an artwork, by John Sokal, of Samuel Beckett’s familiar face constructed from the text of Waiting For Godot . Until recently, it had hung over Gontarski’s desk for 30 years, peering over his shoulder.

“I didn’t find that off-putting,” Gontarski says. “It just seemed about right.”

The Translator’s Funeral, a new short story by Rónán Hession
5

Galway 2020 reinvents itself in safe mode for Covid era
9

‘Harry’s showgirl’: 10 things we’ve learned from the new book about Meghan and the prince
10

Rob Delaney: ‘As my career took off, my son got sick . . . then he died’
Real news has value SUBSCRIBE