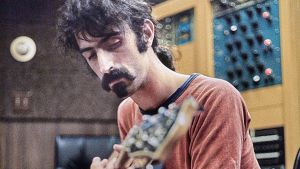 Much as I am opposed to wielding the vertical pronoun in reviews (that’s one used already), it is proper that, when discussing a documentary on a musician so divisive as the late Frank Zappa, I (there’s another) clarify my attitude towards his work. I am largely agin.

The instrumental workouts are often magnificent, but few such recordings sit far from one of his exhaustingly puerile, self-consciously zany, often sexist lyrics. Consider the horrible Jumbo Go Away from You Are What You Is. “Jumbo go away,” Zappa sings, apparently to a groupie. “Jumbo leave me alone. Get your head off my bone.” A squawky high-pitched female voice then exclaims “I’m hungry!” Yeah, hilarious.

Never an official part of the counterculture — he famously banned his musicians from taking drugs — Zappa considered himself to be a “Practical Conservative”. Writing in The Real Frank Zappa Book, during the early days of George Bush snr’s presidency, he explained: “I want a smaller, less intrusive government, and lower taxes.” Rock on!

On the other hand, he stood up against censorship and enabled the peerless Captain Beefheart. Fans will be wearily expecting me to note that the only LP I unapologetically adore is the “Zappa Record for People Who Don’t Like Zappa”. I will not let them down. The only Zappa record I unapologetically adore is Hot Rats (number one in the ZRFPWDLZ chart, followed by much empty space).

Apologies again for the awful “I think…” stuff, but, we should get it out of the way before noting that, while largely opposed to Zappa, I am very much in favour of the film that bears his name . Alex Winter, an experienced documentarian (still best known as the person who isn’t Keanu Reeves in Bill & Ted), does not, alas, address the nastiness of Zappa’s lyrics, but there id no shortage of windows onto the less pleasant corners of his personality.

A particularly grim piece of archive footage has him discussing a return to his wife after lubricious adventures on the road. “I got the clap. Go get a prescription,” he apparently says to the very, very long-suffering Gail Zappa. “I’m a human being. I like to get laid.” For a man so commendably opposed to the aesthetic conservatism of rock music, Frank sounds perfectly at home with its reactionary tendencies on gender relations.

None of which should suggest that Zappa the film is a demolition of this staggeringly prolific artist. Winter remains a fan and, over a lengthy running time, he makes an effective case for his questionable idol as a distorting mirror on the US condition from the 1950s to Zappa’s early death in 1993. Offered access to enormous personal archives, the director has no shortage of impressive visuals to arrange around the guitar solos, satirical ditties and large-scale orchestral compositions.

Raised amid humble circumstances in Baltimore, Zappa became interested in doo-wop, R&B, the avant garde experiments of Edgard Varèse and — usefully for his future documentary biographer — contemporaneous monster movies. As Japanese behemoths destroy Tokyo, we hear him explain how he resisted the orthodoxies of both the rock dive and the formal conservatory.

We learn about early LPs such as Absolutely Free and We’re Only in It for the Money. We move on to cult success, a famous debilitating stage accident, the ridiculous sub-McCarthyite Parents Music Resource Center hearings on “offensive” lyrics, and adulation in newly liberated eastern Europe. By the time the story gets back to conversations with Václav Havel — a massive fan — even the greatest Zappa sceptic will admit grudging respect for the man’s epic belligerence. Few were as gifted in the art of creative bloody mindedness.

It seems less likely that many resistant to the music will be won over. Perhaps overwhelmed by interviews, experimental movies and live footage, Winter allows few compositions to play at length. But the full man emerges in all his contradictions and confrontations.

Not just for the fans.

Available to stream from February 19th