Review: Too many violent set-pieces, though well staged, are placed in no lucid context 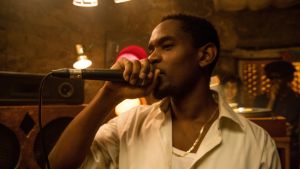 London’s Jamaican community deserves a film that begins with the dread of Perry Henzell’s The Harder They Come and then leads into the colourful fug of Franco Rosso’s Babylon. If you need a source, the pumping novels of Victor Headley – his debut Yardie, for example – will surely provide such a thing.

Sadly, Idris Elba’s directorial debut isn’t all that. It’s good enough. The picture kicks off with an authentic depiction of the home island and then has much violent fun amid the grim streets of early-1980s Hackney. Aml Ameen overflows with charisma as a young man torn between the gangster life and a good woman in a decent job. Something has, however, gone awry with the adaptation. Characters pop up and disappear at random. Too many violent set-pieces, though well staged, are placed in no lucid context.

The Jamaican prologue, set in 1973, finds young D attending a party hosted by his brother to foster peace between two rival gangs. There’s some heavy toasting and a lot of celebration. A flurry of gunfire bursts out and D’s brother is killed. Later, the young man, now played by Ameen, falls in with King Fox (Sheldon Shepherd), a hoodlum who also produces reggae records, and, after getting in a spot of bother, he is sent to London on a cocaine run. The package of drugs shifts possession more than once.

Much of what happens after his arrival is confusing. Now that we’re properly sensitive about casting, punters should be aware – if they are not already – that Stephen Graham, one of the UK’s best actors, is a quarter Jamaican and, thus, that his performance as a gangster who shifts from patois to cockney is not so inappropriate as it initially seems. That dual-nationhood is at the heart of the story. This is a film about the pressures and demands of making another country your own. Too often, however, the viewer will feel as befuddled as the protagonist. Who’s he? What’s that? Where are we now?