Cannes 2017: Todd Haynes latest has moments to cherish, but doesn’t quite deliver the emotional payoff

Wonderstruck is an American drama film directed by Todd Haynes, based on the 2011 novel of the same name by Brian Selznick. The film stars Oakes Fegley, Julianne Moore, Michelle Williams and Millicent Simmonds. 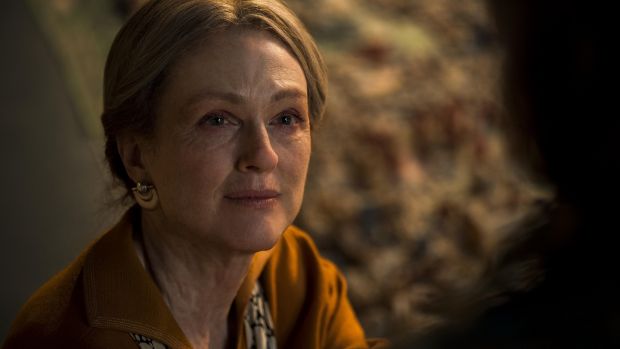 Time, time, time. A few decades after pushing the boundaries of taste with Superstar and Poison, Todd Haynes has directed something that might be a family film. Like Martin Scorsese, who made such a delicious curio of Hugo, Haynes has been drawn to the twisty textual games of Brian Selznick. The author’s 2011 book Wonderstruck offers Haynes many opportunities to exercise his habitual obsessions.

He gets to pastiche earlier moods in cinema. He gets to celebrate the outsider. He gets to film Julianne Moore in warm light. Wonderstuck is a lovely, lovely thing. It abounds with moments to cherish. But it doesn’t quite earn the emotional payoff that it conspicuously seeks.

It would be stretching things to say that the film is about deafness. But it certainly concerns that condition. Wonderstruck tells two interlocking stories that happen 50 years apart. In 1977 (the film’s “present” I guess), young Minnesotan Ben (Oakes Fegley) is coping indifferently with the recent death of his mother (barely present Michelle Williams) in a car accident. Rooting around in search of clues as to the identity of his absent father, he happens upon a document that points him towards a bookshop in New York City.

While he is on the phone, lightning strikes and – in a stroke of pure storybook melodrama – the boy is struck deaf. Later, he digs into his mom’s emergency cash supply and heads for the Big Apple.

In 1927, we meet Rose (the wonderful, open-faced Millie Simmonds), a young deaf girl, who is obsessed with a silent movie star named – in conspicuous tribute to Lillian Gish – Lillian Mayhew (Moore). After falling out with her dad, she makes the shorter journey from New Jersey to Manhattan. The stories mirror each other. Some connections are later justified. Others are forgivable coincidences.

Haynes greatly enjoys playing with the film’s texture. The earlier story is shot in black and white as a silent film. This works well in the more threatening, more sombre moments, but Todd comes a cropper when he tries for comedy. The gags are more Mel Brooks’ Silent Movie than Mack Sennett’s silent movies. The glimpses of Lillian’s films strive with some success for a purer verisimilitude.

When Ben arrives in the Kodachrome funk of New York, we are immediately reminded of the great American cinema of the 1970s. The noise and fuss around the West 40s is properly, grubbily invigorating.

One can only assume that the audience’s mild (bizarrely misguided) hissing at the Amazon logo was merely throat clearing for the imminent appearance of the Netflix brand. In the press conference, Haynes acknowledged that Amazon are dedicated cineastes and that Wonderstruck – shot on film by Edward Lachman – is partly a tribute to two great eras in American cinema.

It succeeds on those terms. The picture also allows Haynes to weave amusing allusions throughout. Ben travels from the city of Duluth, home to Bob Dylan, subject of Haynes’s I’m Not There, and images of the singer clutter the bookshop where he eventually ends up. Carter Burwell’s original score is deliciously rich, and a few roughly contemporaneous pop songs – notably Eumir Deodato’s funk version of Also Sprach Zarathustra – are positioned at all the right aural vantage points.

So, why does the film feel just a little unsatisfactory? In the past, the sparse negative criticism of Todd Haynes has focused on the academic feel of his films. There is occasionally a whiff of the Senior Common Room about them. In Wonderstruck, he strives for a more naked, less clouded emotion, but the picture seems more interested in the outer intellectual carapace.

When a young pal (Jaden Michael) opens up emotionally to Ben, the kick just isn’t there. It’s a Spielberg moment in a still stubbornly Haynesian film.

For all that, Wonderstruck remains a singular entertainment. Mid-ranking Todd is better than top-ranking anybody else.

‘Friends of Dorothy’: How Judy Garland became a gay icon

The strange, true story of Ghana's modern-day camps for witches