Women Make Film: A history of women directors, directed by a man – but in a good way 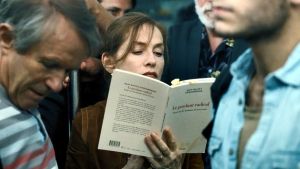 There was a bit of muttering when it emerged that Mark Cousins – a man! – was to compile a 14-hour history of women directors at work. A sensitive fellow who understands the optics (no pun intended), the Northern Irish cinema boffin spent years teetering at the doorjamb before tiptoeing within.

“I... felt slightly reluctant, being a man, to do it myself,” he told the Financial Times. “But at a certain point I thought, f**k it. If I have all this knowledge in my head, it would almost be perverse to sit on my hands.”

Only the most unforgiving roundhead will remain resistant to the epic result. Women Make Film gathers together a century of material – from the blockbusters of Kathryn Bigelow to new discoveries by the likes of Wendy Toye – into a package that combines warmth with rigour, wit with technical know-how. It is essential.

Early on, the narration cheekily argues that “all the teachers are women”. Well, not quite. Cousins has certainly landed distaff royalty to narrate his multipart film (having played at Toronto and Venice, the project counts as cinema).

Jane Fonda, Kerry Fox and Debra Winger are on board. His old chum Tilda Swinton talks us through this opening section. (The others will be released for streaming over the next four weeks.) But anyone familiar with previous Cousins masterworks such as The Story of Film and The Eyes of Orson Welles will recognise the eccentric rhythms of his writing. Sentence fragment. Sentence fragment. Leading question. Neat summation.

Hearing that text in anything other than Cousins’s own remarkable cadence – the keening Belfast vowels drawn out for dramatic effect – never fully stops being disorienting. Please tell us there is an outtake somewhere of Fonda delivering her bits in an Ulster drawl.

Cousins has, perhaps wisely, not attempted a feminist history of the medium. Some viewers may be surprised, in the first episode, to hear so few musings on what distinguishes the female voice in cinema (or, for that matter, any dismissal that such a distinction exists). What we have, rather, is a massive lecture on cinematic technique that just happens to take films by women as its examples.

Mia Hansen-Løve’s Things to Come is one of many projects offering clues as how a story should begin. Leontine Sagan’s legendary Mädchen in Uniform has things to tell us about tone. Andrea Arnold’s Fish Tank shows how to introduce a character. The much-missed Agnès Varda, whom Cousins describes as a “touchstone”, appears in chapter after chapter.

The director is certainly not suggesting the fight is over (it has barely begun), but he is, at some length, confirming it is possible to do what film historians have too often done – tell the story from the perspective of only one gender – in a way it has rarely been done before.

If the project did feature only men then reviews such as this would be focused on the technical arguments. We would muse on how Cousins translates the traditional wide-medium-close visual opening on to the introduction of character in films such as (no, really) Wayne’s World. We would celebrate his parsing of the “mute-cute” mode so beloved of romantic comedy. Deep breaths would be taken as Leni Riefenstahl, Hitler’s hagiographer, is, without any apologies, introduced as the “greatest framer in cinema”.

Yet, for all the focus on technique, Women Make Film, like the best of Cousins’s documentaries, dances from clip to clip with a liveliness that never allows interest to flag.

In acknowledgment of his ambitions to make a “road movie”, footage of thoroughfares across the world winds around each of these illustrated tutorials. Sometimes the splices match. On other occasions we get a jarring shift like that between Barbara Loden’s Wanda and Mary Lambert’s Pet Sematary. It’s always engaging.

A lengthy journey worth making more than once.

This first instalment is available to stream now on BFI Player and Curzon Home Cinema; the other four parts will become available over the next four weeks