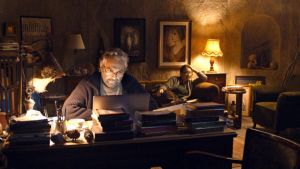 When the latest, enormously long film from Nuri Bilge Ceylan, Turkish master of the slow reveal, took the Palme d’Or at this year’s Cannes Film Festival, there was some chatter that, here again, we saw a worthy director winning for the wrong film. It is certainly true that Winter Sleep does not show the dramatic sweep of the director’s Once Upon a Time in Anatolia. Many were the fast-moving entertainments – Transformers, Die Hard, Starsky and Hutch – that, according to wiseacres, Sleep made “Anatolia seem like”.

For all that, this talk-stuffed anti-drama remains among the most rigorous character studies we have encountered in the current decade. We begin with the camera pointing to the back of the protagonist’s shaggy head. By the close we feel we have been living inside that cortex for the guts of a week.


Now in later middle age, Aydin ( Bilginer) runs a rustic hotel in a remote part of Turkey. He shares the living quarters with Nihal ( Sözen), his younger wife, and his grumpy separated sister Necia (Akbag). Everybody has an issue with the old devil. Necia finds him self-important and pretentious. Nihal feels suffocated and, largely to have something of her own, dedicates herself to charitable works. At one point, she describes her husband as “cynical, spiteful and selfish” then backtracks a little to argue that, though undeniably civilised, he uses his erudition to crush the will of others.

Unlike other masters of slow cinema such as Tarkovsky or Bela Tarr, Ceylan does not trade in bravura images. There is a wonderful shot of a horse being dragged from a river. The local houses carved into the rock offer stunning backdrops. But Winter Sleep is composed mostly of long conversations that skirt big ideas as Aydin and his associates attempt to disentangle the threads of his infuriating personality. In that sense, the picture has the shape and feel of a character study by Saul Bellow. It’s worth paying attention.

Book Ambassadors: What our envoys abroad are reading this summer
10