Williams’s lunatic invention set the template for generation of comedians 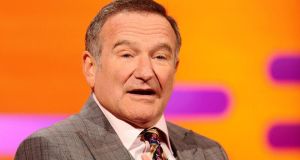 Robin Williams, the actor, stand-up comic and writer, was found dead in his home on Monday. He was 63.

The coroner’s office in Tiburon, California reported that the death was believed to be “suicide via asphyxiation”.

His publicist, Mara Buxbaum, announced that he had been fighting depression in recent months.

“This is a tragic and sudden loss,” Ms Buxbaum said. “The family respectfully asks for their privacy as they grieve during this very difficult time.”

Susan Schneider, to whom Williams had been married since 2011, also issued a statement. “This morning, I Iost my husband and my best friend,” she said.

“While the world lost one of its most beloved and artists and beautiful human beings. I am utterly heartbroken.

“On behalf of Robin’s family, we are asking for privacy during our time of profound grief. As he is remembered, it is our hope the focus will not be on Robin’s death, but on the countless moments of joy and laughter he gave to millions.”

Born in Chicago, Williams studied at the Julliard School before launching himself into a hugely successful comedy career characterised by anarchic improvisation.

He made no secret of his addictive personality and his routines often referred to a dependency on cocaine. He gave up the drug, but addiction problems continued.

In 2006, his publicist confirmed that he had entered rehabilitation for alcoholism.

Williams had a few false starts in the movie industry before finding his natural rhythm in Barry Levinson’s Good Morning Vietnam in 1987.

Featuring wild riffs and inventive improvisations, the role as DJ Adrian Cronauer secured him his first Oscar nomination. He was also nominated for Dead Poets Society and The Fisher King and eventually won the award for his performance as a sympathetic psychiatrist in Gus Van Sant’s Good Will Hunting in 1997.

Critics sensed that he was just finding new more pungent juices as he advanced into his sixties. Sadly, it seems, however, that the old demons had not yet been exorcised. He leaves a significant legacy.

Later comics built on his lunatic invention and embraced the possibilities he opened for a less staid form of stand-up. Without him there would be no Eddie Izzard.

On screen, his combination of childlike energy and lurking sadness proved a potent combination. Last year, he surprised many by delivering a surprisingly effective take on Dwight D Eisenhower in the hit movie The Butler.

Williams was married three times. He is survived by Ms Schneider, a graphic designer, and by his three children.