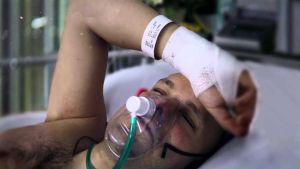 In 1998, aged 22, Mark Pollock had the world at his feet. Having read Business and Economics at Trinity College, he looked all set to graduate and take up a post in the Square Mile.

But then, tragedy struck. He had always had eyesight problems: indeed he had been diagnosed as near-sighted aged 18 months. But this time it was different. He underwent surgery to no avail. Mark, an avid rower and all-round sport Billy, was now blind.

That medical detail was never going to come between the Belfast-born adrenalin junkie and his dreams. In 2002, the adventurer, athlete and kayaker won bronze and silver medals for Northern Ireland in the 2002 Commonwealth Rowing Championships. In 2003, he ran six marathons in seven days across the Gobi Desert. In 2004, he completed the North Pole Arctic Marathon. In 2009, became the first blind man to reach the South Pole.

Within a year, some weeks away from his wedding, a freak fall from a second storey window left Mark Pollock paralysed. Unbreakable charts this extraordinary man’s attempts to get back on the adventure circuit. And there’s more to the story than that.

Ross Whitaker’s boxing doc Saviours never fell into an easy Rocky rhythm and Unbreakable is equally wary of formulaic arcs. Watching this new film, one is reminded of Lucy Walker’s thoughtful portrait of the injured snowboarder Kevin Pearce in The Crash Reel. Later, Whitaker and Pollock shift the tone towards campaigning.

At times the music swells a little too earnestly, and the flashbacks to earlier, easier times come thick and fast, but these heightened, life-affirming tropes frame the admirably stoical Ulsterman very nicely. He tells us that he cried every day for months when he broke his back.