Danny Boyle’s follow-up to the Olympics ceremomy is lurid, crazy, twisty and hard to entirely resist 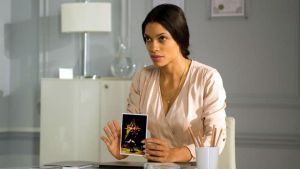 Danny Boyle finds himself in a strange place. After winning an Oscar for Slumdog Millionaire
and mounting that admirably leftist opening ceremony for the Olympics, the Mancunian has gained a degree of celebrity that rarely attaches itself to those who work behind the camera.

Conceived at a point when the Olympics bash was still coming together, Trance cannot be accurately described as a response to that changed status. It certainly doesn’t look like the work of a man who has just become a National Treasure. Packed full of sleek, techno-scored action and knowingly absurd narrative twists, the film suggests that our Danny is determined to let some hair down. Trance doesn’t always work. But you would have trouble arguing that it fails to pass the time.

Events begin with Simon (James McAvoy), employee at a top auction house, getting caught up in the theft of a stomach-churningly valuable Goya painting. Shortly after the hammer descends on the sale, neatly dressed hoods – led by the always-welcome Vincent Cassel – burst through the doors and begin shouting rudely at staff and guests. Simon grabs the prize and heads for a secure drop-off point. But, before he makes the deposit, Cassel catches up and, after an exchange of blows, manages to complete the audacious theft.

What’s this? In the first of a clutter of twists that eventually becomes too tangled for the film’s own good, it turns out that the painting has gone missing from its frame. You won’t need a deerstalker or pipe (honest, don’t write in) to deduce that Simon was in on the heist.

It sounds as if Boyle – working with writer John Hodge, a long-time collaborator – is gesturing towards classic heist movies such as Rififi or The Thomas Crown Affair. Sure enough, the opening section does fizz with the disciplined tension that characterises those entertainments. The main body, however, is closer to Alfred Hitchcock’s problematic 1945 picture Spellbound .

Having suffered serious concussion during the fracas with Cassel’s ruthless kingpin, Simon wakes to discover that he can’t remember what he did with the picture (or, indeed, whether he was involved with its theft). The gang suggests that he sees a hypnotherapist. This being a suave sort of film, they, apparently by accident, select a gorgeously dressed, impossibly sophisticated American named Dr Elizabeth Lamb (Dawson).

The sessions start sensibly enough. Elizabeth prods delicately at Simon’s psyche. Ambiguous clues emerge. The longer things go on, however, the more unlikely and dubious the interactions become. One sordid, mildly misogynistic love romp drags us from the
sexual evasions of Alfred Hitchcock to the explicit aberrations of Paul Verhoeven. The intricate winding together of fantasy, memory and reality ultimately gives into an apparent randomness. By the close, it becomes hard to care about the blasted painting.

Danny Boyle seems, however, incapable of making a dull
picture. As Trance – adapted
from a 2001 TV movie – heads towards the tangled narrative undergrowth, the Boyle Machine is powered up to its highest register. You will know what this means by now. Anthony Dod Mantle’s cinematography locates ever
more luscious walls of unbroken colour. Rick Smith’s music throbs ever more incessantly over the frantic editing. McAvoy is
charmingly confused. Dawson retains dignity in undignified situations. London becomes an impossibly glamorised version of itself.

The film ultimately demonstrates that bold cinematic trickery can – if performed by a master – win out over crass plotting, monochrome characterisation
and cheap sensationalism. The
film does, indeed, replicate the experience of a hypnotic trance. You are swept along while it lasts and then, following a click of the fingers, you forget everything that just happened. A tolerable distraction.