When Tim Brannigan was born his mother persuaded a doctor to declare him a stillbirth. Then she gave him to an orphanage – coming back a year later to ‘adopt’ the son she couldn’t admit she’d had. After that he had a normal IRA-safe-house childhood 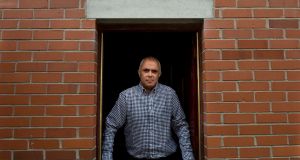 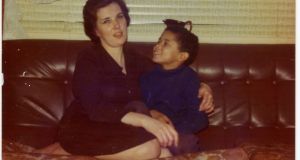 Tim Brannigan as a boy, with his mother, Peggy 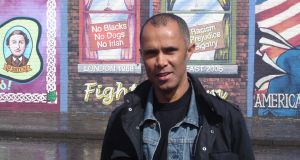 Tim Brannigan in front of a republican mural in 2006

When Tim Brannigan was 19 he found out who he really was. Growing up as a black kid in 1970s west Belfast, he already knew he was different. He had been adopted as a baby, he believed. But it turned out the person who “adopted” him was his own mother, Peggy. As he tells it in his memoir, Where Are You Really From?, it is an extraordinary narrative of secrecy, desperation and deep, unbreakable devotion, played out against the flaming backdrop of the Troubles. So perhaps it isn’t surprising that Hollywood can see its cinematic potential. Brannigan recently sold the film rights to his life story to the Oscar-winning producer John Lesher, and scripting will soon be under way.

“Mum told me everything on July 13th, 1985,” Brannigan says. He remembers the date clearly because it was the day of Live Aid, Bob Geldof’s televised music fundraiser for famine relief in Ethiopia. The family had decamped to an uncle’s holiday house in Cushendall, Co Antrim, to escape the Twelfth parades in Belfast. “The drink was flowing, and my mum was sitting there with a glass in her hand,” says Brannigan. “She started asking me what I wanted to do when I got my A levels. Suddenly she said, ‘Your father was a doctor.’ ”

That didn’t make sense. As far as Tim knew his adoptive father was Tom Brannigan, a delivery man and sometime showband singer, whom he describes as a chancer. “He had plenty of opportunities to fly his kite, and he did.”

“Get ready,” Peggy said. “First of all, you’re not adopted.” Shocked, Tim began to weep. “Don’t cry,” his mother whispered. “People will think I’m shouting at you. And don’t tell them, or I’ll bust your face!”

Peggy Brannigan met Tim’s real father, a Ghanaian doctor named Michael Ekue, in 1965, at a dance hall in Belfast. “She was out on the town with her friends, and this black man came over to them,” says Brannigan. “When I say black, he was really black, west African black, and he stood at about 6ft 3in. One of the women said, ‘I’m not dancing with a nigger.’ ” Outraged at the casual racism of the remark, Peggy waited until it was ‘ladies’ choice’, walked over and invited Michael on to the dance floor herself. That was the start of their affair, and soon Peggy was horrified to find herself expecting a child.

“It was an exhausting, tension-filled pregnancy,” says Brannigan. “She wasn’t sleeping with her husband, so she knew the baby would be born black.”

Instead of going to her local hospital Peggy delivered her son in a clinic in east Belfast, where she managed to persuade a doctor to declare the child stillborn. “He came out and announced to the family, ‘She’s lost the baby.’ Years later I asked my uncle, ‘How did you not know?’ He said, ‘It was the 1960s. If a man walked out of a hospital with a white coat and a stethoscope round his neck, you believed him.’”

Tim was hidden in a room down the corridor, then whisked off to a Belfast orphanage, Nazareth Lodge, and given into the care of the nuns. But his entry in the home’s official ledger, which Brannigan eventually saw in 2006, was marked “not for adoption”. Peggy always knew that she was coming back for her son, and a year later she did. “All of her family and friends believed I would make up for the child Mum had ‘lost’,” Brannigan says.

Peggy’s adopted son was treated very differently from his four brothers. Conscious of the hostility he was likely to face, and desperate to protect him from it, she held Tim fiercely to account for all his actions.

“She would always be spitting on her cuff, rubbing my face, keeping me clean and tidy. She checked my homework every Sunday night, and she often made me rewrite it,” Brannigan says. “One time, when I was little, she caught me peeing in the garden, and she dragged me in and slapped me round the legs. She said she didn’t want white people seeing me doing that.”

One of his early memories of his mother is lying in bed, listening to her raised voice floating up from downstairs. “The Troubles were at their height, and there was this sense of excitement: you could feel it in the house; something was happening. We were an IRA safe house. There would be whispers, a knock at the door, and six men would go upstairs to an empty bedroom. Mum would tell us, ‘Don’t be saying anything in the street.’ ”

Brannigan also recalls IRA training sessions in the family home, where he still lives today. “This guy lay on the kitchen floor with his rifle poking out the back door. He fired a couple of shots, and the noise was ferocious in the house. It gave me butterflies. It sickened me.”

Brannigan graduated from Liverpool Polytechnic with a degree in politics in July 1990 and returned to Belfast shortly afterward. By October he had been arrested, and he ended up serving a seven-year sentence for possession of guns and explosives. Among several hundred IRA prisoners, he was the only black man.

He remembers his time in Long Kesh when his home comes under attack from local thugs, as it sometimes does, especially in summer. Last August he had to leave the house at 3am, on the advice of the police, after windows were smashed by bricks and stones. “As an Irish republican who did seven years in the H blocks, to be forced out of your west Belfast house . . .” Brannigan shakes his head. “I’m a socialist. More of a socialist than a republican, really.”

But Brannigan can laugh about some experiences. He’s a soccer fan, and when watching the game at the pub he sometimes overhears racist language about players. “You hear someone going, ‘Shh, Tim’s behind us.’ Then they come over, buying me pints, saying that Bob Marley’s their favourite artist, telling me I’m a legend. I’m not a legend. I’m just an arsehole like everyone else.”

Peggy died of a brain tumour in 2004. Brannigan took a year off to look after her. In 2007 he tracked down his father in Ghana. “We met at a hotel, because he didn’t want us to go near the house. It was absolutely amazing. He was an impressive man, striking to look at it, wearing a long west African tunic over ordinary trousers and shoes. He’d been working with the UN on finding a cure for malaria. I asked him how he met Mum, and he said that was a very personal question. But you’re my father, I thought. There’s not a family on the planet that doesn’t tell that story.”

After the meeting Brannigan received birthday cards from his Ghanaian family, with messages from the children, saying “Uncle Tim, we can’t wait to see you.” But after a while the cards stopped, and now Brannigan has no contact with his father again.

The morning after Peggy Brannigan told her son the real story of his birth she disappeared. “She wasn’t in bed, and we drove round Cushendall looking for her,” Tim says. “We found her with her shoes in her hand, walking towards Belfast. She was ferociously angry when she got into the car. Later, in 2000, I asked her, ‘Why did you tell me then? What was it about that day?’ ”

“Too much vodka”, she replied.

As a black Irish republican, Tim Brannigan was in demand to comment on Gerry Adams’s recent tweet in which he described Django, the hero of Quentin Tarantino’s 2012 western ‘Django Unchained’, as a “Ballymurphy nigger”. Adams apologised for using the term, although he defended his attempt to compare the situation of Irish nationalists in Northern Ireland with African-American history. Discussing the issue on BBC Radio 4 with the African-American broadcaster Bonnie Greer, Brannigan said, “While it was tough in Belfast as a Catholic, it wasn’t slavery, so I think Gerry may have lost a bit of perspective . . . It’s disproportionate.” Reflecting later on the row, he says, “Black people were in chains; Irish people were not. What Gerry said was racist, yes, but, like us all, you’re allowed to make a mistake.”

Where Are You Really From? is published by Blackstaff Press