Thoroughbreds: a film so deliciously unpleasant, we highly recommended it 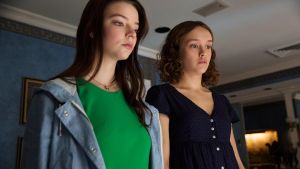 So much of Cory Finley’s theatrical debut is so delicious it feels churlish to yearn for a little more. Effortlessly adopting the bored drawl of Connecticutian Marie Antoinettes, Anya Taylor-Joy and Olivia Cooke, both raised in England, shrew their way through dialogue that comes at Heathers by way of Double Indemnity. The power dynamic shifts throughout. We begin with an eerie scene in which wry Amanda (Cooke) – who claims to be clinically incapable of feeling emotion – arrives for a tutoring session with cool, aloof Lily (Taylor-Joy).

We are made aware of Lily’s emotionally abusive, big game-hunting stepfather (Paul Sparks). The aridity of her background emphasises the paradoxical claustrophobia of large, well-appointed spaces. Before terribly long, jokes about killing the stepdad contort into something like a genuine scheme. It’s sharp. It’s clever. It features a delightful final performance from Anton Yelchin as a deluded loser too dumb to understand how the girls plan to manipulate him.

For all that, there is something missing from the heart of Thoroughbreds. The picture plays like lengthy foreplay for a final release that – though brilliantly staged in a hugely original single take – flits by too quickly to properly satisfy.

None of which should distract from the bravura nature of the staging. Lyle Vincent’s camera, blasted by expensive sunlight, revels in steady, ironic shots that (no damning with faint praise intended) positively yearn to become popular gifs. Look up “hauteur” in a few months and you may well see Taylor-Joy perched coolly on a garden bench as she dares the camera to blink first. An angular score from Erik Friedlander (a frequent John Zorn collaborator) never plays the right bit of an instrument when it can play the wrong one. The screeches meld with the cynical dialogue and hard images to bring us somewhere unexpectedly close to the avant garde.

So what if the ending doesn’t completely satisfy? It is encouraging to encounter a film released by a major studio that dares to be so unpleasant. Recommended.