The Photograph: It could be good, but the constant music is exhausting

Review: Few sex scenes have been so saucily scored since Joan Collins was in her prime 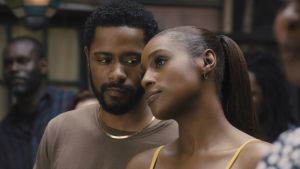 Lakeith Stanfield and Issa Rae in The Photograph

The list of “films they don’t make anymore” now occupies a shelf of similar dimensions to that housing Encyclopaedia Britannica. Nobody has seen a decent detective movie since boot-cut jeans were in fashion. Even the rom-com is endangered.

With all that in mind, we should cautiously celebrate the arrival of a film in an even more moribund genre. The Photograph aspires to the sort of glossy romance that once had us blubbing noisily into any available sleeve. Or does it?

Though sleekly beautiful and enthusiastically played, Stella Meghie’s film makes little effort to flesh out its characters. It’s hard to imagine even the most susceptible audiences caring whether this bland couple get it together.

The narrative machinery has something of Nicholas Sparks about it. Issa Rae plays Mae Morton, a glamorous professional reassessing her priorities after her mother dies. As in Sparksiana, we get flashbacks to earlier days in the American south: mum found her metier as a Louisianan photographer before heading for New York City.

The script can’t decide what mystery it’s uncovering here. There is an eventual revelation (of sorts), but nobody on screen seems any more astonished than the shrugging audience. The flashbacks come at random to tell us things we have almost certainly already guessed.

The main body of the film concerns the even less eventful relationship between Mae and hip journalist Michael Block (Lakeith Stanfield). It takes a kind of anti-genius to render such charismatic actors – Rae is a great comic, Stanfield shone in Sorry to Bother You – so deadeningly, suffocatingly dull on screen. It comes as an enormous relief when Lil Rel Howery turns up to offer some supporting sass. It’s not the greatest part, but you are, at least, not tempted to poke him with a stick to ensure he’s still alive.

Where are the barriers to happiness? Where are the reversals? Michael may be going to work in London. Mae has some problems connecting on a first date. But there is little here to impede or colour their progress towards a boring life in each other’s boring company.

What we do get is a lot of style and a very great deal of music. Everyone lives in the sort of enormous plate-glass apartments that house billionaire assassins in Michael Mann films. The clothes are neat. The hair is immaculate.

None of that is a problem, but the constant music is utterly exhausting. Robert Glasper’s jazz-infused score is lovely, but that’s no reason to layer it over every second of action. If we’re not hearing the quartet improvise around the modes, we’re hearing Al Green or Ari Lennox or Anita Baker. Obviously nobody does anything so unattractive as go to the loo in this universe, but, if they did, they would do so to the strains of Patti Labelle. Few sex scenes have – with an apparent straight face – been so saucily scored since Joan Collins was in her prime.

The ultimate sense is of film-makers working hard to conjure something substantive from less than nothing. Not only are Stanfield and Rae deprived of the straw you need to make bricks, they are short of mud, water, air and a flat surface on which to work.

The film’s failure is a shame. The straight romantic movie deserves to thrive and African-American talent deserves an opportunity to play out its stories in the mainstream. But The Photograph is too nice, too leisurely and too lacking in friction. Oh, for more of the briefly glimpsed satire that, in scenes set in the 1980s, sees Mae’s mom competing for a job against an unending line of banal, primped, Upper East Side princesses. That’s what we’re looking for.