The Old Guard: Charlize Theron is the most potent female action star of our time 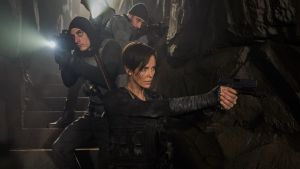 “I’m Andromache the Scythian, but you can call me Andy?”

If you didn’t know where you were with the latest Charlize Theron kick-’em-up, that exchange should clarify things. We pass mid-summer without Marvel’s much-anticipated Black Widow to cheer us up, but Netflix is here to offer a different shade of distaff violence.

The adaptation of Greg Rucka’s comic works from a magnificently silly premise. A gang of mercenaries, first encountered in apparent danger of extinction, turn out to be ancient immortals with experience in medieval England, Iron Age Asia and Belle Époque Paris.

Sadly, the film itself is not quite as silly as it should be (something of an achievement given what you’ve just read). Everyone is taking it very seriously. We don’t get enough characters pulling their limbs together after being hacked to pieces by combine harvester. Some very good actors have been cast in the wrong roles.

No matter. Theron makes it work. Over the past decade the South African has emerged as the most potent female action star of the age. Indeed, Mad Max: Fury Road, Fast & Furious 8, Atomic Blonde and now The Old Guard set her up for the all-time Hollywood title (though more than a few Asian actors and grindhouse stars would view her as a part-timer).

It goes without saying that Theron can fling villains over her shoulder as others might toss rose petals, but her success has as much to do with her steely presence when standing still. She was always able to occupy a room. Mere rooms now cower at the mention of her name.

Gina Prince-Bythewood, previously best known for the romance Love & Basketball, directs with an unfussy touch that allows action and story to unfurl without any intrusive folderols. That may sound like faint praise, but there is a trick to letting this stuff find its own rhythm.

We begin with Andy and her gang messing about in the US’s overseas hot spots. They are lured into a trap and mown down like so much corn, but what’s this? In a shake the gang is on its feet again and ready for action.

Rucka’s own script quite sensibly goes soft on exposition. We don’t need to be talked through hours of hokum about magical potions or conversations with prehistoric deities. It’s enough to know that these people are almost indestructible. The “almost” takes on greater significance as they encounter an annoying young billionaire who wants to utilise their metabolisms for naked profit.

Here we run up against one of several issues. Harry Melling, formerly Dudley Dursley from Harry Potter, does his best as a nerd carved from the leg Jesse Eisenberg walked on in The Social Network, but the ghastly Merrick has insufficient oomph for a chief villain. It hardly needs to be said that Chiwetel Ejiofor does better as an untrustworthy associate – once friendly with the Old Guard – but that role also lacks sufficient cackle.

While that lot are scheming, the Guard are coping with the news that somewhere on Earth, an American soldier, hitherto believing herself mortal, has, after being stabbed by an insurgent, emerged as another member of their tribe.

Little of KiKi Layne’s heart-stopping performance in If Beale Street Could Talk pointed towards an action role and, apparently under-directed, she doesn’t exactly wrestle the part into the mud. But her understated charisma and gift with a breathy line add class to the project.

Like too many opening episodes of comic book movies, The Old Guard is overly concerned with setting up for sequels. That tweaking of origins does not, however, interfere with an engaging series of action sequences that allow the star to exercise (literally and figuratively) her considerable gifts.

The voodoo economics of Netflix’s box office remain obscure, but they will probably get their franchise. Fair enough. Worse films have generated whole empires.

Streams on Netflix from July 10th

Spaced-out Barcelona gets its groove on
6

A Traveller at the Gates of Wisdom: Lively but long-winded
Real news has value SUBSCRIBE