The Legend of Longwood review: a plot as thick as horse thieves 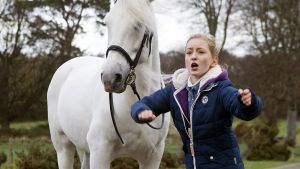 Film Title: The Legend of Longwood

This new kid-friendly drama from director Lisa Mulcahy (Red Rock) opens with a tragic accident as horse-mad New Yorker Mickey Miller (Lucy Morton), injures her trusty steed in a jump attempt. It’s the kind of loss that frequently kickstarts superior family films (say Fly Away Home) and countless fairy tales but it is soon glossed over as the 12-year-old girl and her family move to Ireland, beneficiaries of the estate inherited from a hitherto unknown relative.

Before you can ask: but if they couldn’t afford rental in New York, how could they afford horse-riding? Mickey has encountered a grand old Anglo-Irish lady (Miriam Margolyes) who tells the youngster about a mysterious ghostly black knight on a horse who has popped up intermittently since Famine times, leaving tragedy in his wake.

A number of competing subplots come into play: one involves white horses that patrol the local castle; another fancies itself as a high school movie by introducing a sympathetic local boy and mean popular kids; another sees a rapacious social climbing Bridezilla attempting to wed the castle owner.

Young gymkhana misses and masters may well fawn over the film’s coterie of pretty ponies, but The Legend of Longwood is far too cluttered with blarney and competing narratives. Too often it feels like five movies, not one.

Still, Richard Van Oosterhout’s cinematography is handsome and the cast are likeable even when the script is overly burdened. One for junior hippophiles.

The Books Quiz: Who wrote the famous line: ‘Hell is – other people!’
9