The Last Face Cannes: Nothing can disguise the jaw-dropping imbecility of this project 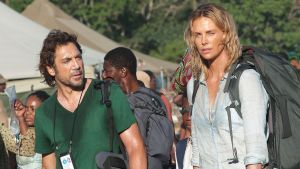 It’s hard to pick a favourite among the many ludicrous sequences in this criminally misconceived picture: Javier Bardem and Charlize Theron in The Last Face

“I’m forever near a stereo saying: ‘What the f**k is this garbage?’” Nick Cave famously remarked. “And the answer is always the Red Hot Chili Peppers.” The continuing allusions to that bar band – one of whose songs gets variations on the soundtrack – is far from the worst thing in this disastrous contribution from Sean Penn, but the opportunity to introduce the word “garbage” at an early stage could not be resisted.

Let’s get through the unintentionally hilarious stuff before addressing the genuinely offensive material in this (let’s be fair) well-meaning non-engagement with African refugee crises. Charlize Theron, speaking in her own South African accent for once, plays Wren, a doctor working with a mildly disguised version of Médecins Sans Frontières. She and her colleagues have doubts about their work – which they express by going for periodic cries in the nearest field – but still turn out to mop up blood during the 2003 Liberian civil war.

Erin Dignam hangs his screenplay around the on-off romance between Wren and the archetypically hollowed-out veteran medic Miguel Leon (Javier Bardem). Ten years later, the estranged lovers meet up in Monrovia. This has thematic significance, you see. An opening message tells us that the brutality of the Liberian conflict parallels the “brutality of a love, between a man . . . and a woman”.

Some lines are so bad they are delivered twice. “In the name of God? What about in the name of you and me?” somebody sceptical of religion wonders. “That’s not grabbing; that’s love,” Jean Reno makes himself say.

We had, perhaps, allowed ourselves to believe that grown-up film-makers had stopped making projects about third-world unrest in which beautiful movie stars descend to alleviate the suffering of anonymous people of colour. The black characters (such as they are) fall into the usual patronising categories: charming tykes, faceless victims and machete-wielding lunatics. They also serve as triggers for appallingly contrived moral dilemmas. Should we respect the wishes of this woman who, after losing her child, now wants only to die? How do we decide who gets the blood when we only have enough for one patient?

Penn has shown some talent as a director with films such as The Pledge and Into the Wild. To say that The Last Face is his worst film at the helm is to understate the jaw-dropping imbecility of the project. At its least terrible it resembles the Unesco videos you get before spare-change drives on aeroplanes. At it’s worst it resembles . . . well, the words cannot be published in a family newspaper.