The Favourite review: A masterpiece of palace intrigue

The Favourite stars Olivia Colman as a frail queen Anne while her friend Lady Sarah (Rachel Weisz) governs the country in her stead . 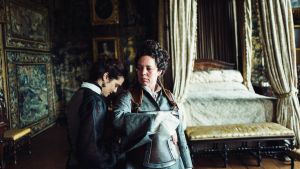 Rachel Weisz and Olivia Coleman in The Favourite

You could reasonably describe the latest film from Yorgos Lanthimos as his most conventional to date.

Then again, you could reasonably describe Das Rheingold as the shortest opera in the Ring cycle, but you still won’t be getting out in time for last orders.

Indeed, the Greek director’s characteristic oddness is emphasised, rather than diminished, by the superficially cosy nature of the scenario. Here is a setup that could generate one of those nice costume dramas the BBC used to drape around Sunday evenings.

It is 1708 and, as the War of the Spanish Succession takes a breather, cynical Sarah Churchill (Rachel Weisz), Duchess of Marlborough, and sly Abigail Hill, later Baroness Masham, squabble for the attentions of dotty Queen Anne (Olivia Colman). Nothing to trouble the horses there. Right?

The Favourite doesn’t offer horrors to compare with Lanthimos’s The Lobster or his The Killing of a Sacred Deer, but the creative misanthropy and orchestral cruelty are every bit as striking. The director has taken Deborah Davis’s original script and, with the assistance of co-writer Tony McNamara, hammered into something unmistakably Lanthimosian.

Queen Anne loves her many rabbits as she might have loved her dead children. A spectacular, super-slow hip-hop dance takes place to angular harpsichord music. For the first time in her career (so far as I can remember) Emma Stone enters the action covered in excrement.

An acute understanding of the court’s perverse conventions helps Lanthimos along the way. In The Lobster and Dogtooth, Yorgos enjoyed imposing lunatic strictures on his imagined societies. In The Favourite, the rules are already in place.

Sarah Churchill, wife of the great general John Churchill (Mark Gatiss), begins the film as the Queen’s great confidante. Only she can tease her. Only she has effective influence. Early suggestions of a sexual relationship are later confirmed in explicit fashion. Abigail Hill, Sarah’s younger cousin, ruined after her father gambled away her fortune, arrives malodorously and is set to work scrubbing the kitchen floors.

Like Steerpike in Mervyn Peake’s Gormenghast, she is soon plotting to worm her way into the upper echelons. The fight is brutal from the beginning.

Olivia Colman, tragically petulant in the manner of a disappointed Violet Elizabeth Bott, has been classed as “lead actress” in all the awards races, but The Favourite is very much a three-hander (with good support from attendant, wiggy males such as Nicholas Hoult and Joe Alwyn). No character is ever exactly happy, but the performers are clearly having a ball.

Weisz deliberately fails to conceal Sarah’s cruelty between a thin carapace of kindness. Stone emits an unladylike snort that raises disdain into an art form.

Every department performs at the top of its game. Sandy Powell’s costumes are all to die for, but Weisz – at one point something like Adam Ant’s dandy highwayman – is particularly well served: a blend of theatrical flourish and mild fetish wear. The music blends baroque with the awkwardly modernist. Robbie Ryan, the great Irish cinematographer, has never been on better form.

The candle-lit, mahogany (literally and figuratively) interiors, so redolent of Stanley Kubrick’s Barry Lyndon, are frequently rendered via sickeningly heightened fish-eye lenses that emphasise the contained, solipsistic orbits of each character.

It shouldn’t need to be said that the film-makers have prodded the historical facts to their own mischievous ends. Anybody complaining about inaccuracies deserves one of Stone’s nasal snorts. Others may more justifiably wonder if Lanthimos’s aesthetic is occasionally just a little too misanthropic.

There is more warmth in the average Samuel Beckett play than you’ll find in the director’s entire oeuvre. These are, however, the colours he works in and, not for the first time, he’s fashioned them into something like a masterpiece.

What a way to start the year.