The Canal review: Where has all the Bergman gone?

Have you ever wondered: why has no cinematographer ever sought to capture the thousands of glorious greys that define Irish skies? 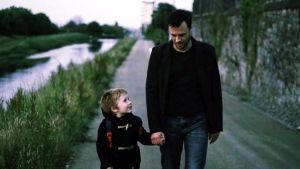 Rupert Evans and Calum Heath in The Canal

Have you ever wondered: why has no cinematographer ever sought to capture the thousands of glorious greys that define Irish skies? Piers McGrail, the 2015 recipient of the Michael Dwyer Discovery Award and the DOP for Glassland and The Canal, is the answer. McGrail’s moody lensing sets the tone for Ivan Kavanagh’s eagerly awaited fifth feature.

With a curtsey towards The Shining – check out Ceiri Torjussen’s discordant score - The Canal concerns film archivist David (Hellboy’s Rupert Evans), who, in the course of his duties, discovers that his elegant Georgian home, was once the scene of a brutal, turn-of-the-century murder spree.

This discovery dovetails with a suspicion that his glamorous wife Alice (Hannah Hoekstra) is having an affair. When Alice goes missing, tough, no-nonsense copper McNamara (Sightseers’ Steve Oram) immediately suspects David, who reacts by retreating further into the century-old murder footage and by clinging desperately – both literally and figuratively – to his young, dinosaur-obsessed son (Calum Heath).

Is our hero cracking under the pressure? Is he guilty? Or is a more supernatural agent at work?

Director Ivan Kavanagh first came to prominence with a diptych of wincingly powerful dramas – Our Wonderful Home and The Fading Light – critically adored, award-laden films that worked to anoint the director as a digital-age Ingmar Bergman.

This is not the Kavanagh joint we were expecting: Never Grow Old, his western, is still on the drawing board. But the filmmaker has flirted with horror before: Tin Can Man, finished in 2007 and reissued in 2012, was a sustained and surreal creep-out.

The Canal, though reliant on atmospherics and superb sound design, looks and feels more than genre cinema than Kavanagh’s earlier, freakier one.

Even operating within this established framework, there are virtuoso moments: odd, disjointed edits muddy the line between fantasy and reality, half-glimpsed figures dart around the edges of the frame, low-angle shots make for psychological unease, and a dirty public lavatory sequence makes the viewer yearn for the comparatively sanitary conditions of the Edinburgh equivalent in Trainspotting.

Where has all the Bergman gone? Sit tight for the gut-punch epilogue. You’ll see.