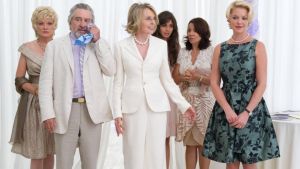 Gather your grandchildren to the knee and tell them of a time when the names of Diane Keaton and Robert De Niro on a film’s poster telegraphed quality. I suppose the distributors of this dreadful comedy are obliged to acknowledge that those two actors star alongside such reliable harbingers of catastrophe as Katherine Heigl and Robin Williams. They may as well have mounted shrunken heads at the entrance to the cinema. Joseph Conrad filled the long route to Mr Kurtz’s compound with less troubling omens.

Oh, it might not be so bad. Susan Sarandon is, these days, a tiny bit less at home to garbage than Keaton and De Niro. Somebody is bound to fall in the swimming pool. And that’s always hilarious.

As it happens, The Big Wedding – adapted from a French film I’m happy never to have seen – is every bit as atrocious as the portents suggest. It’s much more boring than you might expect. It contains a baffling vein of racism that seems channelled in from a distant decade. Robin Williams’s turn as an alcoholic priest is so unintentionally terrifying you find yourself trying to repress the memory even before he has exited the screen.

Oh, hang on. What’s it about? Keaton and De Niro’s adopted son, who’s originally from Colombia, is about to marry a corn-fed Irish-American gal. On the eve of the wedding, we learn that the boy’s birth-mother, a devout Catholic, does not know that Bob and Diane divorced many years previously. So poor old Sarandon, De Niro’s current partner, is dispatched to the outhouse while the old lags pretend to be still happily entwined.

The film has the nerve to make the bride’s parents snobby racists. Meanwhile, they cast the unavoidably English Ben Barnes as the adopted son and present his Central American mother as a simple-minded halfwit and his birth sister as a “free-spirited” exotic strumpet. How do you want your hypocrisy?

Oh well, at least somebody does fall in the swimming pool. It’s Robert De Niro. Unfortunately, he resurfaces.