The live-action films have been smurfed from history, along with the snark and zingers - this reboot is strictly for the younger kids 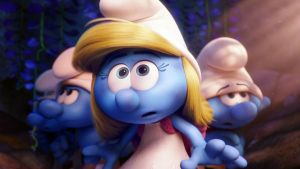 The unbearable blueness of being: Smurfette ponders the purpose of her existence, and 12 minutes later, Brainy, Hefty and Clumsy must rescue her

Fictional female characters don’t get much more abysmal than Smurfette, a female so solitary that she has a syndrome named in her honour. The Smurfette Principle describes “the only girl in the room” in movies and TV shows, a lone creature that is frequently defined by girlie attire (Princess Leia in Star Wars), ditzy blondeness (Penny in The Big Bang Theory), or maternal function (Kanga in Winnie the Pooh, April in Teenage Mutant Ninja Turtles).

Hence, in Smurf Village, “normal” or boy Smurfs can be clever (Brainy Smurf) or brawny (Hefty Smurf) or culinary (Baker Smurf, as voiced in this new film by Gordon Ramsay). But a girl Smurf can only be just that.

Smurfette’s origins story – a honey trap fashioned from clay by the evil wizard Gargamel – further undermines any feminist possibilities. Sony Pictures Animation has seemingly got wise to these ideological difficulties.

This animated reboot – that’s right, those 2011 and 2013 live action mash-ups featuring Neil Patrick Harris and Brendan Gleeson have been smurfed out of history – opens with Smurfette (Demi Lovato) in contemplative mode. What, she wonders, is the point of being Smurfette? Twelve minutes later, Brainy, Hefty and Clumsy have to rescue her from Gargamel’s clutches, a twist that suggests Mary Midgley can sleep easy. In the flurry of blue activity that follows, Smurfette spies a strange, new Smurf – an inhabitant of a lost village.

But can Smurfette and the boys find this mysterious new race before Gargamel does?

Stacey Harman and Pamela Ribon’s script is, accordingly, free of both snark and zinger. Rainn Wilson, replacing Hank Azaria, goes full throttle as Gargamel, leaving many of starrier colleagues in the dust.

For all that, there’s little here for accompanying parents or older siblings. And the film never does figure out what the smurfing point of Smurfette is.