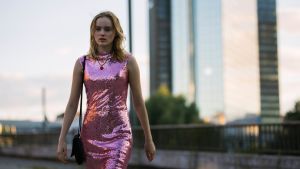 Don’t mind the title: there’s very little sense of rebirth and rising from the ashes in this powerful Swedish drama.

On the eve of her 14th birthday, Jill tiptoes into the darkened family apartment and around her mother Astrid (Maria Bonnevie). With an unstable Astrid cooped up in bed, it falls to Jill to tend to her younger brother, Bo (Casper Falck-Løvås). Despite her mother’s outbursts and instability, Jill remains hopeful that Astrid can land a job arranged by a family friend. She only has to turn up. That may be trickier than it sounds.

Another hope arrives in the form of Jill’s estranged father (Sverrir Gudnason), a jazz trumpeter whose white suit and white furniture signals his unsuitability for family life. He has a new girlfriend in the city so he may be able to spend more time with them.

Jill’s birthday allows for a brief respite from being the primary caregiver, but the viewer is already aware than even this is built on a lie. A gift of a sparkly pink debs dress may be the saddest gift since Jane Wyman received a television in All That Heaven Allows.

There are nods towards Pan’s Labyrinth as Jill’s woes manifest themselves in fleetingly glimpsed monstrous forms. Mostly, Phoenix prefers grim realism to the supernatural. The slow-burning script stubbornly eschews revelatory showdowns in favour of a dutiful sense of carrying on regardless. A small moment in a film composed of small moments sees Jill looking longingly at a male classmate. In a John Hughes film, it would usher in aching puppy love; here, it’s a painful reminder of the normal teenage life that remains out of the suffering young heroine’s reach.

Brie Larson is sick of being interviewed by ‘white dudes’
8