Shoplifters: A Japanese masterpiece that creeps up on you

Review: A family of petty thieves take a cold and hungry girl into their care 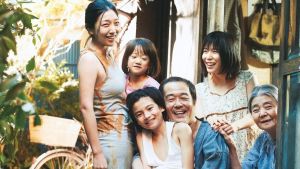 When the latest film from Hirokazu Kore-eda won the Palme d’Or at Cannes there was some mild surprise, but, after a bit of pondering, the decision was accepted as eminently sensible. The Japanese film-maker has been constructing quiet, nuanced masterpieces for 20 years, and Shoplifters shows all his talents to advantage.

The film creeps up on you. It yields its pleasures stealthily. It has, however, more to say about questions of public and private morality than whole libraries.

Kore-eda has ended up with the most Dickensian of structures. He sets his film amid a family of petty thieves from an unfashionable corner of Tokyo.

Osamu (Lily Franky), the pater familias, is a master shoplifter and is now training his teenage son to follow in his footsteps. His daughter works in online pornography. His long-suffering wife, Noboyu, has a job in a laundry. Granny is addicted to pachinko slot machines.

Life takes an odd turn when they encounter young Juri (Miyu Sasaki) looking cold, hungry and miserable on a nearby balcony. They take her home and she becomes part of the ramshackle posse.

George Cruikshank, Dickens’s illustrator, would have had a ball with the household. Odd objects clutter every available space. You can’t move for peculiar faces and awkward bodies. Dickens himself would have enjoyed the moral quandaries the film kicks up.

Society calls these people immoral and anti-social: they steal and swindle; they inveigle Juri into their schemes. But their motivations in welcoming the girl (a sort of benign kidnapping) are above reproach. She has been abused in her original family and they want to make her comfortable.

Kore-eda allows the actors to tease out complex characters with the greatest economy. Sakura Andô is particularly strong as the mother, a hugely funny woman who will work any angle to get by. All come together for a touchingly merry visit to the seaside that seems set to become a poignant memory.

Unlike Dickens, a Christian writer even in his gloomier late novels, Kore-eda is not interested in constructing a harmonious resolution. There is much unhappiness here. But his belief in the species’ capacity for connection speaks of a hopeful constitution.