Scary Stories to Tell in the Dark: Stephen King would approve 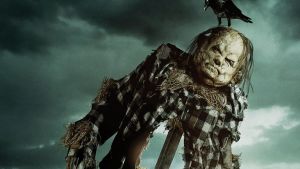 Scary Stories to Tell in the Dark: just the sort of goo that younger horror fans adore

Film Title: Scary Stories to tell in the Dark

This very agreeable (sometimes deliberately disagreeable) horror romp derives from a series of teenage shockers that emerged in the 1980s, but, under the sharp eye of producer Guillermo del Toro, the action has been dragged back to Halloween of 1968. That proves a canny decision. Kids are being drafted to Vietnam. Night of the Living Dead is at the drive-in. Richard Nixon is about to win the presidency. Layering on stacks of delicious period detail, shot in an oily gloom by Roman Osin, Scary Stories does a good job of convincing us that this was the point at which the bad stuff began.

Hanging around retellings of the books’ best yarns – The Big Toe and Harold among others – the film could be described as a portmanteau entertainment, but those sections are belted out so rapidly that the framing story ends up dominating. Happily, this is handled well by a likeable cast of largely unfamiliar young actors.

Zoe Colletti is super as Stella, an older teen with a passion for horror stories and a guilty need to care for her abandoned father. On the night in question, she is persuaded out for trick or treating and, after grim encounters with a bully, happens upon an old book that causes terrible things to happen. “You don’t read the book; the book reads you,” somebody says as bloody words appear on hitherto empty pages.

Scary Stories to Tell in the Dark - official trailer

One does, however, wish for a little more of the icky horror that spills out in the nested stories

The kids interact nicely as they adjust to the unlikely news that their awful fate is being spelt out in the foxed volume. The screenplay by Dan Hageman and Kevin Hageman works in believable social problems of which Stephen King (someone who’s written plenty about this era) would much approve. One does, however, wish for a little more of the icky horror that spills out in the nested stories.

The prohibitive 15A cert may dissuade some parents from bringing teenagers – and, to be fair, the creature seemingly modelled on Francis Bacon paintings is properly horrid – but this is just the sort of goo that younger horror fans adore. Read the classification officer’s notes and make up your own mind. Fourteen-year-old me would have had a ball.