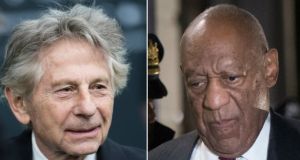 The Academy of Motion Picture Art and Sciences has confirmed that it is expelling Roman Polanski and Bill Cosby.

Polanski’s conviction goes back much further. In 1977, the Polish director, charged with drugging and raping a 13-year-old girl, pleaded guilty to the lesser offence of unlawful sex with a minor. He subsequently fled California, where the incident occurred, and has remained an exile in France ever since.

The news confirms a marked shift by the Academy – the body that awards the Oscars – in its determination to discipline members for ethical transgressions. Only two members had ever before been expelled.

Last October, following multiple accusations of sexual misconduct, Harvey Weinstein, producer and founder of Miramax Films, was removed with the message that he “does not merit the respect of his colleagues”. Up to that point, slightly bizarrely, the only expellee was the actor Carmine Caridi, accused of sharing a movie screener that subsequently ended up online.

The expulsion was decided at a scheduled board meeting of the academy on Tuesday but only announced on Thursday night.

The Academy’s statement on Cosby and Polanski explained that they had been removed “in accordance with the organisation’s standards of conduct”. It went on: “The board continues to encourage ethical standards that require members to uphold the Academy’s values of respect for human dignity.”

Dozens of accusations of sexual misconduct had been made against Cosby, a successful actor and comedian for over 50 years, before a jury in Pennsylvania found him guilty late last week.

Gloria Allred, who represented many of the complainants, tied the finding into the #MeToo resistance campaign that had sprung up in the aftermath of the Weinstein case. “We are so happy that finally we can say, women are believed, and not only in a hashtag ‘#MeToo’, but also in a court of law,” she said. “After all is said and done, women were finally believed, and we thank the jury for that.”

It is not enormously surprising that the Academy reacted as it did as regards Cosby. The Polanski case is trickier. No new evidence has recently emerged about the assault on Samantha Geimer at Jack Nicholson’s house in March 1977.

In 2003, the voters of the Academy were happy to award Polanski the best director Oscar for his work on the wartime drama The Pianist. Twelve months ago, his latest film, Based on a True Story, premiered at the Cannes film festival.

The clear message is that the Academy is now prepared to discipline members for historic offences. Questions will be asked about its attitude to Oscar winners such as Kevin Spacey, who has been accused of sexual misconduct.

The decision was easier in the cases of Polanski and Cosby in that both have been convicted of crimes. Harvey Weinstein has yet to go before a jury, but the accusations were so numerous they proved impossible to shake off.

Many awkward decisions are still to be made.

Unthinkable: How do we ‘know’ anything?
9