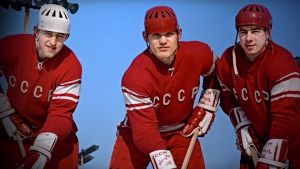 Gabe Polsky’s brilliantly entertaining sports doc opens with footage of Ronald Reagan, as if to alert less eagle-eyed viewers to the notion that this is never just a brilliantly entertaining sports doc. Between 1978 and 1992, the Soviet Union’s superbly propagandistic ice-hockey teams won three Olympic golds, eight World Championships and – much to the chagrin of a certain actor- turned-president – hearts and minds globally.

There can be little doubt that Soviet team captain Slava Fetisov contributed greatly to these achievements, although the puck-passing hero with an Order of Lenin and an asteroid named in his honour has little time for such individualistic conceits: “We were the same,” he insists.

Red Army might have been a simplistic Cold War chronicle replete with Soviet-era hardships – three families shared the Moscow apartment where Fetisov grew up – but the Werner Herzog-produced documentary is far too nuanced for us and them dramatics. We are introduced to the KGB appointed coach Viktor Tikhonov, an army general who kept the players in a barracks for most of the year and passports under lock and key.

But we also encounter Fetisov’s first coach, Anatoli Tarasov, who studied chess and the Bolshoi ballet to formulate his training regimens and tactics.

There is, additionally, something affecting and commendable about the former Soviet team’s spirit of collectivism.

When Fetisov finally moves to the US where he wins the Stanley Cup with the Detroit Red Wings, he is dismayed by the NHL players’ lack of selflessness.

There’s a lesson here for fans of any contemporary sport and an absolutely thrilling tale, impeccably assembled besides. Sporting glory awaits, even for those viewers who couldn’t tell a jockstrap from a jellybean.

David Sedaris’s Lockdown Diary: ‘I destroy everyone I’m a Fitbit friend of’
6

‘Guernica’: 80 years on still a stark reminder of war’s horror
7

The Darkness Echoing: How the past is politicised and marketed
Real news has value SUBSCRIBE