Oscars 2017: Our verdict on the winning films and performances

Did Moonlight deserve its last gasp win? Was Emma Stone up to scratch? Here’s how we reviewed the winning films 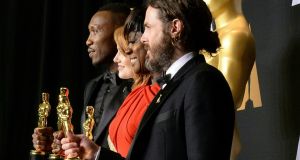 “La La Land ravishes from densely populated beginning to eye-moistening denouement. It swells with the indulgence and the daring of youth. As in Whiplash, the male lead does quite enough jazz-splaining to his nodding girlfriend. The form is more intoxicating than the substance. Those imperfections take little away from a project that understands the pleasures of awkwardness.

“Emma Stone has a sweet, fragile voice and a reasonably sure step. The puppyish Gosling is less confident with a tune, less purposeful in his hoofing, and he mimes jazz piano with only tolerable efficiency. No pretences are being made. That occasional uncertainty adds a humanity that succeeds differently to the godlike fluidity we adored in Cyd Charisse and Gene Kelly. ”

“Barry Jenkins’s transcendent second feature is about the challenges boys encounter as they become men. Cinema has been in and around this area time and time again, but Moonlight still feels abundantly fresh and endlessly imaginative. As meticulous in his shots, clean in his colours and precise in his rhythms as Wong Kar Wai, Jenkins gives us a complex American hero to compare with Huckleberry Finn or Holden Caulfield.

Manchester By The Sea

“Kenneth Lonergan, the brilliant writer-director behind You Can Count on Me and (the criminally undervalued) Margaret, wrote Manchester by the Sea as a means of articulating his own experiences with deepest, darkest depression. You can tell he’s drawing from life.

“This exquisitely mounted depiction of unbridled misery pivots around Lee Chandler, an alcoholic janitor played by Affleck. A series of Proustian flashbacks slowly reveal the terrible events behind Lee’s pained existence, events that are so ludicrously tragic they would put most operas to shame.

“The torment is palpable, the script is hard-hitting and Jennifer Lame’s editing is a marvel.”

“There is an awful lot of movie in Mel Gibson’s attempt to re-enter respectable Hollywood. This is not a comment on Hacksaw Ridge’s length (though it’s long enough) or its quality (though it’s not at all bad). A director whose lack of subtlety harmonises with a fecund gift for the mechanics of the art, Gibson delivers a work that plays ruthlessly on the audience’s raw sensibilities.

“Little can prepare the viewer for the jolt of Gibson’s battle scenes. This not the messy hyper-reality of Saving Private Ryan or Come and See. The firefights play out like the more ghoulish panels from an EC horror comic. One minute we’re joshing in the parade ground, the next we’re using our comrades’ severed torsos as improvised shields. Gibson’s unmistakable enthusiasm for violence works against the high moral tone, but the deranged gusto of those sequences cannot be questioned . . . You will not be bored.”

Won Best Actress in a Supporting Role for Viola Davis

“We have rarely had an Oscar favourite as unassailable as Viola Davis. In Denzel Washington’s version of Fences, the acclaimed play by August Wilson, Viola plays the long-suffering wife of a middle-aged garbage man who was once a promising baseball player. The director makes a charismatic monster of the protagonist. Davis is heartbreaking as the woman who has made his happiness her abiding concern.

“Thanks heavens for those two key performances. Denzel swells with dangerous charisma. Viola works high emotion from every one of her many lines. They are so good they almost convince us we’re watching a movie.”

“When the predators turn nasty, the prey suggest that the more toothy animals are returning to their nature. Does this work as a metaphor for racial discrimination? Doesn’t it kick up all kinds of undesirable connotations? Aside from anything else, tigers really do eat rabbits. Right?

“The animation is so cute and the jokes so tight that this central insecurity is easily overlooked. More impressive still, Zootropolis (which was bewilderingly re-titled after emerging as Zootopia in the US) has a plot you can really, ahem, sink teeth into.”

“The film is flawlessly acted. Ordinary-looking people pass through huge emotions without ever resulting to histrionics. Outbreaks of violence are rare and, thus, when they do occur, they are all the more shocking. If anything the film is, in its closing act, not quite enigmatic enough. Farhadi trades in the poetry of the unsaid, but, in the closing sections, The Salesman takes on the quality of an art-house hostage thriller.”

“The Jungle Book is beautifully real and absurdly unreal. The animals have a rippling weight that belies their formulation on a computer in downtown Los Angeles. The backgrounds are a little too clean to form anywhere outside an animator’s imagination. It looks like the work of a benign warlock.

“This is a gorgeous, sweeping entertainment that combines the epic – a rain-whipped ascent through muddy hills is particularly awe-inspiring – with the intimate and the offbeat.”

OJ: Made in America

Anyone trying to grapple with the reasons for the malevolent, strained turn which America has taken over the past year should make time to watch OJ: Made In America.