Equal rights, voting rights and immigration rights all placed firmly in front of the cameras 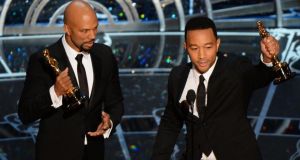 Racial representation proved a particularly contentious issue at this year’s ceremony, given the absence of any black or African American nominees in the four most prominent acting categories.

Even before Harris’s remarks, the topic had prompted plenty of discussion on social media, with #OscarsSoWhite trending on Twitter over the course of the evening.

Attention was drawn to the subject principally due to the perceived exclusion of the film Selma from most of the prestigious awards. It recounts a turbulent period endured by Martin Luther King Jr in the three months leading up to the passing of the historic Voting Rights Act in 1965.

“To every woman who gave birth, to every taxpayer and citizen of this nation, we have fought for everybody else’s equal rights. It’s our time to have wage equality once and for all and equal rights for women in the United States of America.”

Arquette’s observations on gender inequality were fairly self-explanatory. Set against a backdrop of disillusionment over the continuing disparity in wage expectations for men and women globally, her impassioned oration got a rousing reception from the assembled audience, including an uncharacteristic bout of fist pumping from the usually serene Meryl Streep.

“We know that right now the struggle for freedom and justice is real. We live in the most incarcerated country in the world. There are more black men under correctional control today than there were under slavery in 1850.”

One year on from the sensational success of 12 Years a Slave, Best Original Song category award winner Legend drew a poignant comparison between the struggle for black emancipation during the 1850s and 1860s, and the current plight of jailed African Americans.

Currently, about 40 per cent of inmates in American correctional facilities are black, which far outstrips that racial group’s overall population representation of 14 per cent.

A number of civil liberty and penal reform groups are currently campaigning to have the imbalance substantially addressed by US authorities, including the American Civil Liberties Union and the Sentencing Project.

“Stay weird, stay different and when it’s your turn and you’re standing on this stage, please pass on this message”

The Imitation Game screenwriter, who received plaudits for his adaptation of a 1983 book about codebreaker Alan Turing, spoke candidly about his own troubled adolescence, and opened up about an attempted suicide at age 16.

He added: “Any kid out there who feels she’s weird or different or she doesn’t fit in anywhere – yes, you do. I promise you do.”

“I pray that we can find and build a government that we deserve, and the ones that live in this country, who are a part of the latest generation of immigrants in this country, I just pray that they can be treated with the same dignity and respect as the ones who came before and built this incredible immigrant nation.”

Speaking of one of America’s largest ethnic groupings, Birdman director Iñárritu alluded to the difficulties facing Mexican immigrants whose presence and influence is growing across the States.

Latest figures released by US authorities indicate that 445 attempted immigrants lost their lives attempting to gain entry to the southwest border of the US – one of the most heavily policed stretches of border in the world.

Isaacs’ comments were a pointed reference towards the controversy which accompanied the release of The Interview last year.

The movie, which fantasises over a fictional and fairly irreverent interview with North Korean premier Kim Jong-un, solicited a visceral response from the reclusive nation’s authoritarian regime, including a series of cyber attacks linked to the film’s release.

After an initial delay, it was eventually released to digital platforms in the US on Christmas Eve before a cinema rollout in various countries in early January.

Strategy is psychology: the mad rationale behind the Vietnam War
10