Of all the gin joints ... Rick’s Cafe recreated in Casablanca

Rick’s Café Américain never existed, so a US ex-diplomat decided to build it in Casablanca 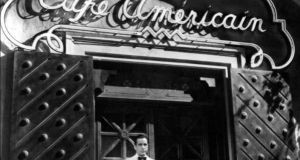 Some things get better as time goes by. Rick’s Café may be one of them. Chris Kelley, an Englishman from Bath, stopped there one recent day for lunch on his way to a kite-surfing vacation in southern Morocco, and said he was impressed at how lovingly restored the old place was. It was just like the one in the movie Casablanca.

Like many visitors here, Kelley was surprised to learn that Rick’s Café Américain never existed, except on a Hollywood movie lot, where the classic film starring Humphrey Bogart and Ingrid Bergman was made.

It was 1942, the world was at war, and the eponymous city was occupied by the Axis powers. Rick’s was just the figment of a writer’s imagination.

The owner and founder of the real Rick’s Café in Casablanca is a former American diplomat, Kathy Kriger. “We wanted to make it everything it was in the movie, and then some,” she says.

A dozen white arches supported by columns frame the main dining room, under a three-story, octagonal cupola, and green leather bumpers grace the curved bar top. Palms in the corners, hanging brass chandeliers, beaded table lamps and a baby grand piano tucked into an archway lend to the period-authentic mise-en-scène.

Not coincidentally, Kriger on most nights can be found standing at the corner of the bar, the waiters under instructions to refill her wineglass with water until 11 pm, when a Moroccan Val d’Argan Blanc is allowed. A lot of the regulars call her “Madame Rick.”

The incarnation of Rick’s Café has nothing to do with the second World War, but a lot to do with the modern-day war on terrorism, and Kriger’s own small role in it. It also has much to say about the enduring power of a great work of art to affect destinies in real life.

Like a lot of Americans, Kriger was long a fan of Casablanca, which often makes critics’ lists of the 10 greatest movies of all time. She first saw it in 1974 at a movie festival in her hometown, Portland, Oregon.

“At the end, everyone stood up and applauded,” she says.

Kriger later joined the State Department, which posted her as a commercial attaché to this Atlantic coastal port, Morocco’s business center and biggest city.

She was stunned to discover there was no Rick’s Café here, which seemed to her a missed marketing opportunity.

Then came the September 11th attacks, and what she considered a backlash in America against Muslims. She wanted to fight that backlash, she says.

She decided that a good way would be to show that an American woman, operating alone in a Muslim society, could start a business like Rick’s Café, to act as an exemplar of tolerance, a refuge in a troubled world.

Kriger found a wreck of an old stately home in the Ancienne Medina, the old city of Casablanca, which was then and is still a shabby, litter-strewn place.

The house did not look like much, but it faced the port, had two royal palm trees flanking its front door, and inside was an architectural gem in the rough. She enlisted noted interior designer Bill Willis to help restore it, and went to a Moroccan bank for a loan.

The loan wasn’t enough, so Kriger began emailing friends in the States with a pitch that began something like: “Of all the gin joints in all the towns in all the world, this is the one.”

Many of them responded to the idea of starting a real Rick’s Café. She referred to her fundraising effort as “rounding up the usual suspects”, which inspired the name of the corporate entity that would own the club.

It was 2002 when she was fundraising, amid much suspicion in America about the finances of Islamic extremists, so she proactively went to the Treasury Department to explain why people were wiring money to the Usual Suspects Société Anonyme in Casablanca. Even so, one of her investors, in Lincoln, Nebraska, received a visit from the local FBI office to question his investment, she says.

Kriger was interviewing Moroccan candidates for a manager when she met Issam Chabaa. He mentioned he could play the piano. “I asked him to show me, and he sat down and played As Time Goes By,” Kriger says. “He was hired.”

He has been with her since the opening 14 years ago. Chabaa still plays jazz piano several nights a week, as well as managing the club’s 60 employees. Hardly a week goes by without some diner asking him to “Play it again, Issam.”

Chabaa does play “that song” a lot, but he’s a proud man. When customers say, “Play it again, Sam,” he corrects them: “My name is Issam.”

What Kriger feels she has created, she says, is a place that can showcase what is great about America and Americans, when the country is once again on a protectionist, isolationist bent.

Casablanca was, first of all, a propaganda movie, at a time when Americans were debating whether to send troops to North Africa and later to Europe. Kriger’s own politics are hinted at in the restaurant’s menu, which includes dishes like “Obama Family Chili con Carne.” It is surprisingly spicy.

Her Rick’s Café seems a success, filling its tables in five dining rooms over two floors for lunch and dinner on most days. At any given sitting there are guests from such a variety of places they would rival the movie’s own very international set of characters, and cast.

One recent Friday, the clientele included Italians, British, Americans, Chinese, Colombians, Chileans, French — plus a table where they declined to say where they were from.

The Serbian ambassador to Morocco was down from Rabat, sitting in her customary place next to the roulette table, which is only for show, since gambling is illegal in Morocco. “I know the history,” says Sladjana Prica, “but still I prefer to believe this is the real place.”

On a screen nearby, the movie Casablanca played on a continuous loop.

Many of the cafe’s modern-day clients come because of an abiding affection for the film.

“Our parents practically raised us on Casablanca,” says Bridget Donvin, 21, from New Zealand, who was visiting with her 24-year-old sister, Mary. “I don’t think a year went by that we didn’t watch it.” Over lunch, they sent their parents scores of cellphone pictures of the cafe.

Lakeitha Anderson, 49, is more of an exile than a tourist, an American who decided after President Donald Trump’s election that she was leaving the country and taking her employment recruiting business on the road.

“I love the oasis feeling of it here,” she says, over dinner. “Especially for people of colour, we need a break from it all.”

Wasn’t the point of the movie, though, that the oasis that was Rick’s Café Américain could not long evade what was happening in the wider world? “That may be,” Anderson says, “but I’m going to stay away for as long as I can.”

Kriger, 72 and divorced, says she plans to spend the rest of her days in Rick’s Café, holding up her corner of the bar when she is not mingling with customers. “This is my assisted living centre,” she quips.

Or as Humphrey Bogart’s character, Rick Blaine, put it in the movie: “I’m going to die in Casablanca. It’s a good place for it.”