Review: The film’s freaky visuals are peak psychedelia. The songs aren’t bad either 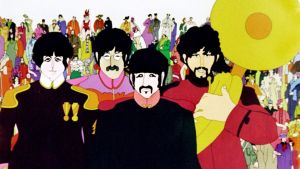 The Beatles might not have been The Beatles without a little help from their friends. The Fab Four had a gifted team around them, including producer George Martin and manager Brian Epstein, and they cleverly chose their collaborators.

Yellow Submarine might not have been Yellow Submarine. The Beatles had made two feature films for United Artists, A Hard Day’s Night (1964) and Help! (1965), and hoped to avoid making a third, even though they were contractually obliged. They only approved Yellow Submarine to avoid appearing in another film.

Their input was reportedly marginal – they famously didn’t even dub their own voices – but once they saw the rough cut they were won over and agreed to appear in the live-action final scene.

The plot and the wry dialogue takes cues from Beatles lyrics and from Edelmann’s designs. Words are played with both as giant illustrations and as puns and associations.

“Once upon a time, or maybe twice, there was a land called Pepperland. Eighty thousand leagues beneath the sea it lay, or lie (I’m not too sure),” sounds the opening gambit. “Liverpool can be a lonely place on a Saturday night … and this is only Thursday morning,” Ringo drolly intones.

The film’s freaky visuals – a wild splatter of marsupial cannons, socks with heads, bellies with teeth, paper-doll footballers, interdimensional holes – are the ne plus ultra of psychedelic art.

Cartoons might not have been cartoons – at least as we know them – without Yellow Submarine. The Eleanor Rigby section would pave the way for the discombobulating faux-Victoriana of Terry Gilliam’s segments for Monty Python; the blue meanies are the sure progenitors of even meaner aliens that inhabit René Laloux’s Fantastic Planet; Josh Weinstein, a former writer for The Simpsons and producer for Futurama, has argued that neither of those shows would exist without the lasting comic influence of the 1968 picture.

And the songs are pretty good, too.