The penguins are cute, but the big fluffy sheepdog steals the show in this delightful Aussie drama 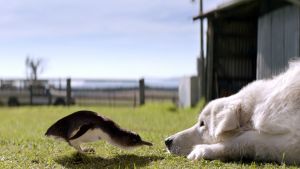 Unlikely heroics: Oddball and the Penguins

Film Title: Oddball and the Penguins

On an appropriately little island off the coastal port of the coast of Warrnambool, a colony of little penguins has been brought to the brink of extinction.

Typically scary phrases like “environmental-themed drama” and “based on a true story”, may pertain, but fear not, lecture-dodgers.

While the film does make the mistake of paying too much attention to the film’s contingent of adult problems – we never see Olivia without a parent or guardian and we could do with more waggeldy tail – but Oddball and the Peguins is never less than delightful.

Damian Wyvill’s handsome cinematography and the movie’s big-hearted performances compensate for occasionally evident budgetary constraints. The film has already taken more than $10 million in its native Australia. It’s not exactly this year’s Babe. But it is a lovely, old-fashioned family entertainment.