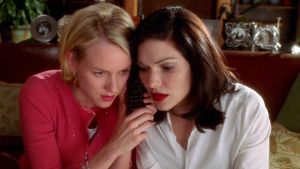 There is a special place in hell for internet pundits who declare that they have found the “solution” to Mulholland Dr. This temptation to view works of surrealism – or any other branch of modernism – as a crossword puzzle has been lurking for a century. If we just answer a few troubling questions then we can construct the proper story that the author has concealed beneath all these diversions.

This is not to suggest that there aren’t helpful foot holes scattered about the forbidding face of David Lynch’s most recent great film. Mulholland Dr (the title is always styled thus) may actually be about something we can write down in words. Like the protagonist of A Star is Born and, more recently, that of The Neon Demon, Betty (Naomi Watts) has come to Los Angeles with dreams of celebrity. The city she encounters is a real place.

It is not Twin Peaks or the ghostly industrial wasteland of Eraserhead. You will learn more about the texture of Hollywood from Mulholland Dr than you will from the less forbidding frames of La La Land. Lynch is at home to aspiration and dreams, but he also believes in the monster that lurks round the dumpster.

Few scenes so effectively convey the transformative power of cinema than the episode that sees Betty, working with a text that has hitherto fallen flat, conveying unsettlingly rich emotion in an audition. The passion is all the more unsettling because it is decontextualised.

Are these answers? Let’s pretend they’re not. Originally conceived as a television series, Lynch’s gorgeously mounted film hangs around the relationship between Betty and the more mysterious, more potentially dangerous Rita (Laura Harring). Halfway through, something happens and they become a dream in the mind of two people who look very like them. Or they may be that? If that works then run with it.

Mulholland Drive (the thoroughfare) skirts Hollywood without quite becoming part of it. In sections it almost enters the wilderness. We probably shouldn’t pretend that this tells us anything about the film’s relationship to that part of Los Angeles, but we drop the hint anyway.

Mulholland Dr is reissued some 15 years after it was released. It was rapidly hailed as the first great US film of the century. None since has been any more powerful. (Answers at the bottom of the page.)