Depp, along with Gwyneth Paltrow and Ewan McGregor, offer the sort of gross caricature of Englishness you would expect to encounter from Celtic supporters at closing time 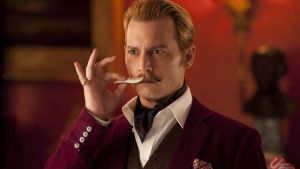 This wilfully terrible film marks a significant juncture in Johnny Depp’s peculiar career. It is, to him, as the assassination of Archduke Franz Ferdinand was to the Balkan League: a jolting, possibly irreversible tipping point.

For at least a decade, we have been able to pretend that Depp, still nominally one of his nation’s great actors, was merely going through an unhappy phase. Look at him in his silly hat speaking in that unfunny, reedy accent. Watch him balancing precariously on a stone pelican. There are worse ways of acting out a midlife crisis.

He got away with frightful performances in Alice in Wonderland and the later Pirates of the Caribbean pictures because those projects made so much money. David Koepp’s useless adaptation of Kyril Bonfiglioli’s likable Mortdecai books – Raffles by PG Wodehouse – does not even have the questionable virtue of saleability to recommend it. Shares in Depp Industries are plummeting.

It can be reasonably argued that bigotry is only of real significance if perpetuated by the powerful on those less favourably positioned. Just as well. If the English were minded to object, they could declare Mortdecai among the most racist films to enter cinemas since the days of “blacking up”. An American director has persuaded two other Americans and a Scotsman to act out a story of art theft in a version of Britain apparently informed by Danger Mouse and the Quality Street tin.

Depp is heart-sinkingly effete as the titular Lord Charlie Mortdecai, an eccentric art-dealer married to Gwyneth Paltrow’s sexless sexpot. The reliably ho-hum Ewan McGregor circles as an interested detective. The story has something to do with a stolen Goya, a murdered art restorer and (indirectly) a conspiracy to embarrass fine actors such as Jeff Goldblum and Paul Whitehouse.

Featuring computer-generated images worthy of an insurance commercial from the 1980s and irritatingly jaunty music by Mark Ronson, the picture looks as if it cost about a tenth of its absurd $60 million budget. The story flails. The camera lumbers.

It is, however, those three core performances that really drag Mortdecai into the sludge. Each hitting his or her consonants with shattering precision, Paltrow, McGregor and Depp offer the sort of gross caricature of Englishness – all “jolly good show” and wavy-mouthed smirks – you would expect to encounter from Celtic supporters at closing time. Depp may be attempting a pastiche of Terry-Thomas, but, truth be told, his latest clunking variation on non-specific English foppishness could slip unnoticed into half-a-dozen of his recent projects. Paltrow’s character, for all her grandness, still says “whom” when she actually means “who”. McGregor seems lost.

Still, it’s hard not to feel a little sorry for Mortdecai. The poor thing is really not significantly worse than Alice in Wonderland, Dark Shadows or Pirates of the Caribbean: On Stranger Tides. A sombre bell has, however, been sounded in its vicinity. Depp’s credibility has crumbled. What does he have left but fame, money, indestructible good looks, houses in France, a vineyard and underexploited talent? Oh hang on…